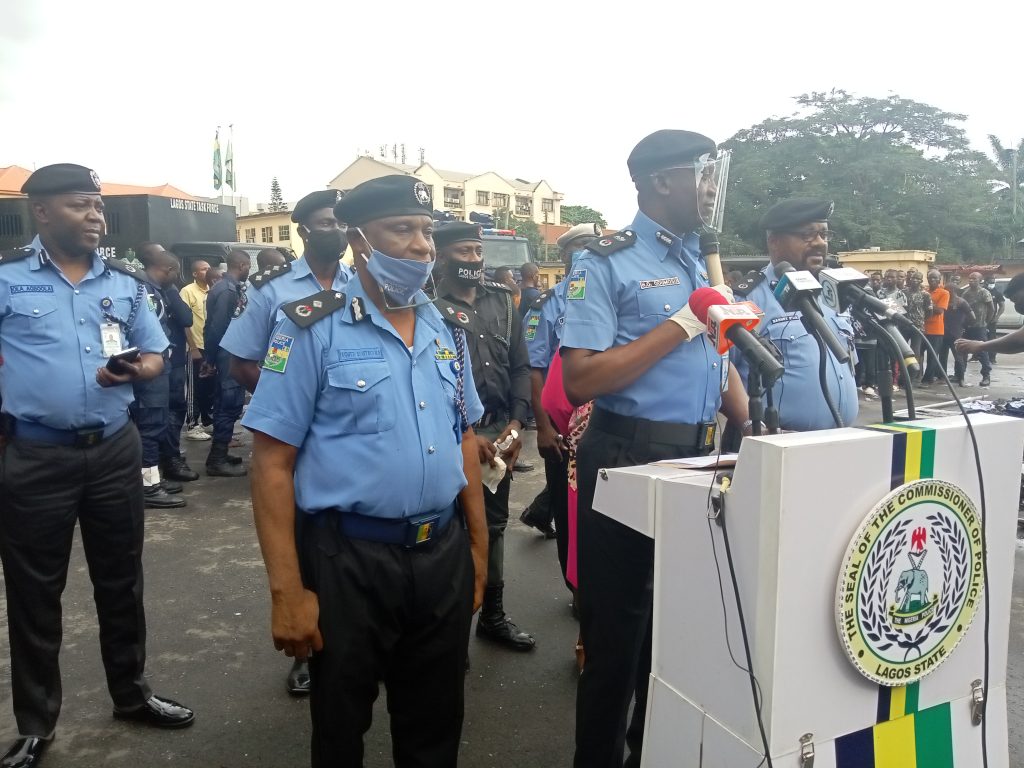 Parading the suspects before newsmen in Ikeja on Wednesday, the Commissioner of Police in Lagos, CP Hakeem Odumosu, said that they were arrested during a raid.

The police boss said that several military accoutrements, including camouflage badges of ranks, signboards, and identity cards were recovered from the suspects.

Other items recovered from the suspects included recruitments letters, promotion letters and portrait of the commanding officer, two motorcycles, Plasma Television, three cutlasses, charms and other items.
Mr Odumosu said that the Nigeria Marchant Navy had since 2019 been outlawed by the Federal Government, noting that it was illegal for anyone to operate such an outfit giving military training to unsuspecting youths.

“This trend portend danger for our nation and a threat to peace and security and that of the state in particular. This, therefore, beholds on us as a law enforcement agency to enforce such law banning activities of the illegal military outfit.

“I want to use this medium to warm other individuals or groups still operating such illegal outfit in any part of the state to close it forthwith; anyone nursing the plan to operate such outlawed security outfit is advised in his own interests to recind the decision or face the full wrath of the law.

”The police would not hesitate to clampdown on them and their operators and bring them to books.

“We, therefore, urge members of the public with useful information about anyone operating a clandestine military outfit or training camp to inform the police for necessary action,” he said.

The CP said that the suspects would be charged to court as soon as investigation into their activities was concluded, stressing that those innocent will be set free.

Meanwhile, Mr Dakare, one of the Commanders of the Nigeria Marchant Navy, who spoke to journalists, said their operation was backed by law and that they also got approval from the Ministry of Defence to operate.

He said: “There was no time they erected a house at the camp, what they did was just a makeshift for them to rest, we have been operating at Ogudu for over 10 years;, we are doing recruitments and waiting for the final approval from the federal government.
“Our Bill is before the National Assembly and it has passed second and third readings in which the police are aware of what we are doing. We are not carrying out any operation. We are still waiting for government approval.

“We recruit online without collecting a dime. We work near the sea, the way police and army are working on the ground. We don’t post people to go on the road, we only camp there,” he explained. (NAN)