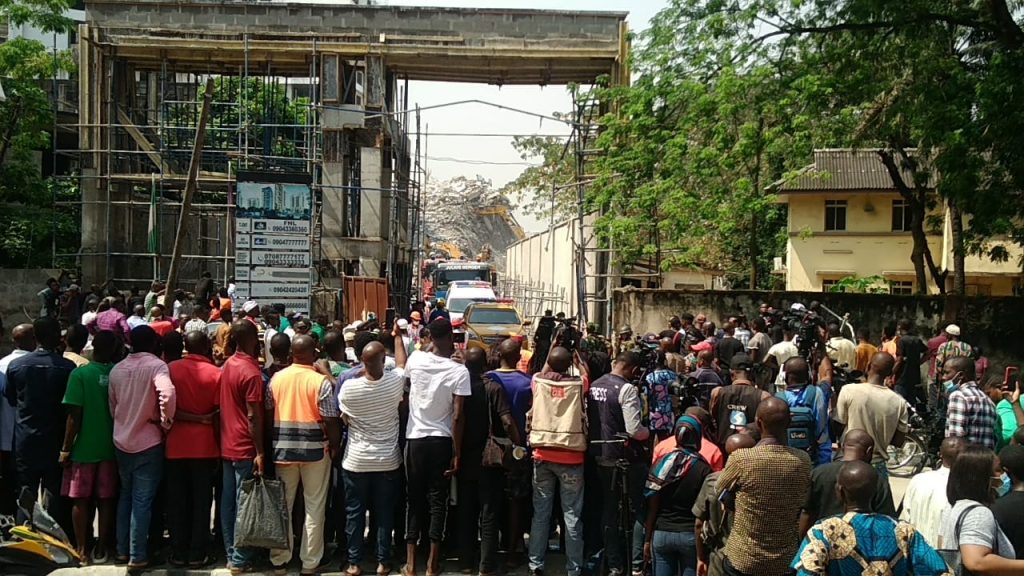 News Investigators/ No fewer than 15 dead bodies and nine injured persons have been recovered from the rubbles of the collapsed 21-storey building at Gerrard Road, Ikoyi, Lagos.

The Southwest Zonal Coordinator of the National Emergency Management Agency (NEMA), Ibrahim Farinloye, confirmed this to the News Agency of Nigeria (NAN) at the scene of the incident on Tuesday.

The building under construction crumbled at about 3 p.m. on Monday, with about 50 workers feared trapped.

“So far, 15 dead bodies and nine injured persons have been dug out of the rubbles.

“When the Deputy Governor of Lagos State was here, we had about 10 dead bodies recovered and five more had been discovered as the operation continued,’’ he said.

Oke-Osanyintolu said that about eight cranes were being used for rescue operations.

Meanwhile, the Inspector-General of Police (IG-P), Usman Baba, who visited the scene sympathised with the victims’ families, describing the incident as unfortunate.

Mr Baba said there was a need to strengthen the regulatory agencies in charge of such high-rise buildings.

He stressed that strict supervision by such agencies would avoid such incidents in future.

“Those in charge of the construction that compromised the standard of work should be prosecuted,’’ the IG-P said.

NAN gathered that a youth corps member, named Oridamola Zainab, is one of the victims trapped inside the rubbles calling her family members for rescue.

Calls by victims under the rubble have generated agitations and protests from relatives and friends who gathered at the entrance of the gate requesting to be allowed to join in the operation.

Mr Farinloye, who was pacifying the agitators, pleaded with them to calm down, assuring that the rescue team would surely get to the ground zero, “but it will take time’’.

After a long protest, 10 young men who claimed to be relations of the victims were later selected to join the rescue team.