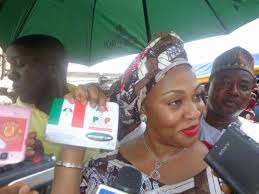 …”Politics ought to be and must be service to the people”

Chieftain of the People’s Democratic Party PDP in Kwara and former senator, Gbemisola Saraki has condemned the high cost of University education in the state, saying it is one of the most expensive in the country.

Senator Saraki who addressed the youths in Ilorin on Sunday at the unveiling of the PDP billboards at some locations in the city lamented what she called the politics of the elites for the elites, insisting that the poor masses deserve a better deal from political class in the state.

She said politicians should be assessed base on their antecedent, calling on the youths ignore smearing campaigns targeted at her. “We insist and will continue to demand for affordable and quality education. The primary duty of government is to cater for the well being of the masses of our people in Kwara,” Saraki added.

Adding that her party PDP, is positioned to take over power come 2015. But we must for a strong and united front for us to achieve this,” she added.

“Yet, Kwara state University is one of the most expensive universities in Nigeria, what sort of education is that? Education that cost our people so much but did not prepare the graduates to be competitive.

“That is why l am saying that we need to watch carefully, the kind of people we vote into office. Check their history, the people around them and what they stand for whether they see politics as opportunity to make money or as service to the people,”  the former senator told her teeming supporters.

Saraki who earlier obtained her permanent voters card in Agbaji area of Ilorin was welcomed by a huge crowd who were thrown into spontaneous jubilation even as the shout of ‘Sai Rukah’ rent the air at her arrival at the venue.

Senator Gbemi later visited the family house where she commiserated with the bereaved family members and elders in the compound.

She also visited the Shoprite Shopping mall in company of some children even as supporters and well-wishers also trooped into the center at the as the news of her visit spread across the city.