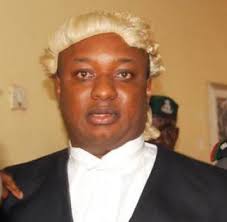 Keyamo in a letter addressed to the president gave a 14-day ultimatum claiming that the appointments of Chief of Army Staff, Lt-General Azubuike Ihejirika; Chief of Air Staff, Air Vice Marshal Alex Sabundu Badeh and Chief of Naval Staff, Rear Admiral Dele Joseph Ezeoba had been rendered null and void by the court, saying the court order must be respected.

Justice A. Bello of the Federal High Court, Abuja had on July 1, 2013 declared the appointments of the Service Chiefs as null and void on the ground that the appointment was not ratified by the National Assembly.

Keyamo’s letter copied the Senate President and the Speaker, House of Representatives stated that the court judgment in the case of Festus Keyamo V PRESIDENT & 4 ORS, delivered by the Honourable Justice A. Bello of the Federal High Court, Abuja declared that the appointments of Service Chiefs without the approval of both the Senate and the House of Representatives was null and void in line with Section 18(1) and (2) of the Armed Forces Act, Cap. A20, Laws of the Federation of Nigeria, 2004.

He said: “up till now, no appeal has been filed against that judgment. It goes without saying that all the present Service Chiefs namely:Lt-General Azubuike Ihejirika (Chief of Army Staff), Air Vice Marshal Alex Sabundu Badeh (Chief of the Air Staff) and Rear Admiral Dele Joseph Ezeoba (Chief of Naval Staff), were all appointed without the confirmation of the National Assembly. Their appointments are therefore null and void ab initio.

“Your Excellencies, and Honourable Speaker may I, most respectfully remind you that ours is a constitutional democracy founded on the rule of law and not the rule of force. In fact, that is why the real intent of Section 18 of the Armed Forces Act is to subject the Armed Forces to civil authority,” he stated.

Adding that, “it is also pertinent to observe that neither the President nor the Service Chiefs are constitutionally superior to the National Assembly. As a result, the appointments of Service Chiefs, which are political appointments, cannot be different from other political appointments that require the confirmation of the National Assembly, e.g the Chief Justice of Nigeria, Justices of the Supreme Court and Court of Appeal, Chairman of Economic and Financial Crimes Commission (EFCC) and Independent Corrupt Practices and Other Related Offences Commission (ICPC), Ministers of the Federation and Ambassadors,” he said in the letter.

Keyamo warned the president not to give the impression that the military is still above the law, saying “that the most embarrassing of this scenario is that the custodians of the power of confirmation, that is the National Assembly, despite folding its arms whilst he proceeded to court to give life to its constitutional powers, had even refused to do anything to comply with the judgment when a court of law has clearly given life to that power. It is sad for our democracy.”

“As it is today, all official actions taken by the Service Chiefs since the 1st of July, 2013, when Judgment was delivered are null, void and of no effect in the eyes of the law. It only needs someone who is affected by their official actions to challenge their authority in a court of law.

“In the circumstance, and the spirit of compliance with court judgments, obedience to and respect for the rule of law, I would humbly require that you direct, advice and enforce compliance with the judgment of the Federal High Court given on the 1st of July, 2013,” he stated.

“If within 14 days of the receipt of this letter you all fail to act I, as a patriot and free citizen of this country, will have no option but to head back to the court to compel compliance. The ball is in your court,” Keyamo warned.