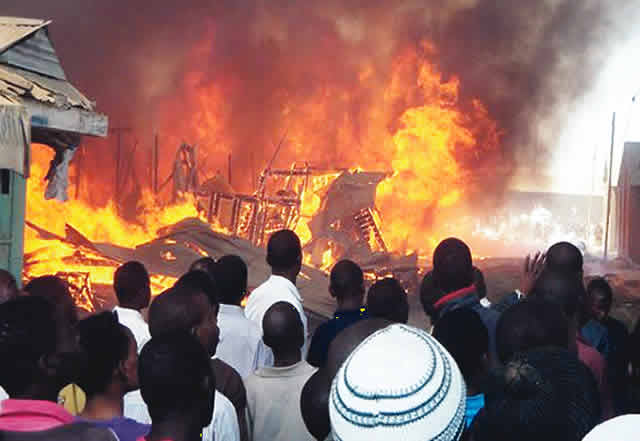 News Investigators/ The Kano Electricity Distribution Company (KEDCO) says it has no blame in the Dec. 19 inferno at the Alibert furniture shop on Club Road, Bompai, Kano.
This is contained in a statement by the Head, Corporate Communication, KEDCO, Ibrahim Shawai on Friday in Kano.
“The KEDCO health safety and environment unit carried out an investigation to ascertain the root cause of the incident in order to put record straight vis-à-vis ongoing speculation that the fire outbreak was caused due to a spark from a nearby H-pole of Ahmadu Bello Way 11KV feeder.
“The unit stated that based on findings and observations as well as interviews with some eye-witness revealed the fire outbreak was rather ignited by an electrical fault within the generator house and not due to a spark from our power installations.
“The fire could not have been ignited by a spark from H-pole of Ahmadu Bello Way 11KV feeder close to the generator house as speculated due of the following observations.
“The J and P fuses were opened and there was no load on any of the down dropper cables since transformers were out of service for a very long time,” he said.
Mr Shawai said that no sign of fire or carbon deposit was found on the down dropper cables at the base of H-pole adding that even if there was a spark, the fire was expected to manifest right under the H-pole not somewhere else.
He also said that power installation at the top of H-pole was intact, saying that the rubber that was claimed to have dropped from pole with fire could not have escaped the roofing sheet below it.
“The erection of makeshift structure for generator, switch gear and diesel tanker were in gross violation of our standard safety code,” Mr Shawai said.
He advise the public to adhere to safety standard within premises and also avoid violation of the right of way of power lines.