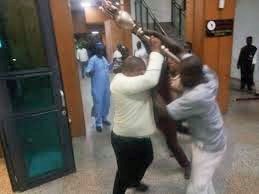 By Sadiq Umar – Fresh facts emerging from the National Assembly revealed the Mace was forcefully taken away by unknown persons led to the Senate chamber by the suspended Senator, Ovie Omo-Agege, as the senate resume plenary Wednesday.

A report monitored on AIT shows that no sooner the deputy senate president, Ike Ekweremadu assumed his seat to preside over the day’s sitting than pandemonium broke out right inside the hallowed chamber at the entrance with some officials of Sergent-at-arm seen struggling with the “strangers” who were throwing chairs ostensibly to create confusion.

In a commando style, at about 11 25 a.m., the men numbering five were led straight towards the mace by Mr. Omo-Agege while some the confusion lasted.

The men got hold of the mace and made away with it in the full glares of the camera. Amid the pandemonium, they ran out of the chamber unrestrained and escaped through the back gate of the National Assembly premises through the adjourning gate leading to the Presidential Villa.

While this was happening, the suspended senator then made straight to his seat, even as the visibly confused presiding officer, Mr. Ekweremadu called for a closed door session.

Mr. Omo-Agege, who was suspended last week for 90 legislative day over his pro-Buhari stance.