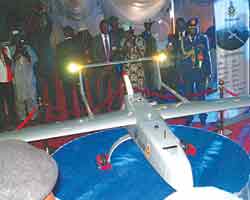 President Goodluck Jonathan  at he occasion of the unveiling ceremony at the NAF base in Kaduna said, the various other innovations by the Nigerian Armed Forces have reinforced the true position of Nigeria’s emergence in military science and technology.

The drone  which was code named Gulma which in Hausa language means gossip, has the capacity to support internal security operations, to which Mr. President said is the manifestation of “NAF commitment to the protection of our sovereignty” and “the new awareness of self-reliance and global competition.”

“As we stand in appreciation of the gallant men and women of our Air Force, we are reminded that hard work and diligence can break many barriers. I would like to especially commend the Chief of Air Staff and all officers and men of the Nigerian Air Force, for this pioneering achievement, which will strengthen our nation, and enhance our role in peace keeping and in conflict prevention,” Jonathan remarked.

Also, the Supervising Minister of Defence, Mr. Labaran Maku said the development of a surveillance aircraft by NAF at this crucial moment in our history is a bold statement of our resolve to provide security for the Nigerian populace.

Maku said the Gulma UAV should be made available for the use of other security services in the light of the prevailing security challenges in the country.

The minister stressed the need for a comprehensive policy on UAV acquisition and operation to optimise the use of Gulma UAV by all the services and security agencies.

He said the local content utilization in the acquisition of military assets would be encouraged by the Ministry of Defence with the impetus the UAV technological breakthrough has brought.

The Chief of Air Staff, Air Marshal Alex Badeh said it was part of his vision to transform the Nigerian Air Force into a force that can boast of high technological innovations that would further place the force on the path of global competitiveness in order to fulfill its national defence and security objectives.

Badeh, said other previous attempts were marred by vendor-related problems which eventually led to the grounding of all the three systems that started in 2005 four years in 2009.

Said he: the decision to acquire UAV technology was partly borne out of our bitter experience in the hands of foreign vendors who had frustrated our efforts in the procurement, operation and maintenance of UAV; a trend which was set to continue if we just lay back and wholly depend on foreigners”, he noted.

Badeh said with the establishment of NAF Optimising Local Engineering (OLE) team in 2012 after the dissolution of the Presidential committee on maritime safety and security, to among other things “spearhead the development of indigenous aircraft” with specific instructions to produce an operational UAV. The intention was to match “the growing versatility of UAV as a prime tool for enhancing success in virtually all military and security operations”.

Badeh said the OLE team has trained 15 Nigerian UAV pilots saving Nigeria huge cost as quoted by the foreign vendors, to which he stated that Nigeria can make huge savings “if we look inwards and rely on our capacities and capabilities as a nation”.

He called on the Federal Government to transform NAF OLE from a mere innovative research outfit into a viable aircraft production centre, as well as increase funding to develop human capacity and infrastructure to sustain the tempo and facilitate the possibility of mass-producing the drones.