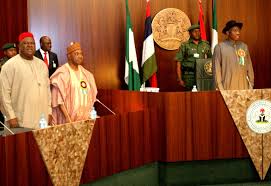 The Federal Executive Council has approved the main report of the 2014 National Conference, even as President Goodluck Jonathan takes steps to implement the report.

Secretary to the Government of the Federation, Sen. Anyim Pius Anyim, who briefing State House correspondents after the meeting,said the recommendations and resolutions that require constitution amendment and enactment of new laws would be forwarded to the National Assembly for promulgation into law.

The endorsement of the conference document by FEC is seen as the first step to implementing the recommendations of the report.

According to Anyim, the Attorney-General of the Federation, Mr. Muhammed Bello Adoke, has been directed to compile, vet and make such recommendations available to the President for onward transmission to the National Assembly.

Anyim said the Council also approved the delegates’ modalities for implementing their resolutions or recommendations.

He explained that what the council did was to approve the modalities as suggested by the conference itself on how to implement its recommendations and resolutions.

Also, agencies’ policy matters in the report shall be referred to the affected agencies and the tier of government concerned, whether federal, states or local governments, for action.

“On other matters that require legal issues, for instance, where it concerns constitutional amendment, it is not really the responsibility of the National Assembly alone.

“They have to work with the state assemblies in bringing effect to this.

“We also believe our country will benefit immensely from the work of this conference.”

He noted that while the process leading to the implementation of the report might not end during the life time of the present administration, a bold step forward had been taken with the approval.