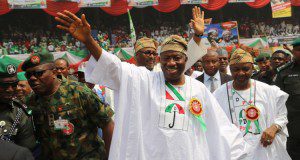 The Deputy Chairman, Finance Committee of the Presidential Campaign Organization, Dr. Ngozi Olejeme has urged Nigerians to judge President Goodluck Jonathan by his record of performance.

Olejeme who met with prominent Igbo leaders in Abuja praised President Jonathan for injecting honesty, efficiency and competence into the art of governing.

‘A vote for President Goodluck Jonathan is a vote for transparency, accountability, due process, prudent management of scarce resources and development” she said “

Excited about the performance of President Jonathan and his programme of action on housing, security, health, education, foreign policy, women, youth, environment and sports, Olejeme who is also the chairman of Nigeria Social Insurance Trust Fund (NSITF) said the People’s Democratic Party (PDP) presidential candidate empowered a lot of Nigerians.

“President Goodluck Jonathan created jobs for many. He guaranteed food sufficiency, made it possible for many women to participate at the highest decision making levels, gave agriculture and solid minerals exploitation due attention, rehabilitated key roads, rail line and airports in the country, implemented the Almajiri school system in the northern part of the country and established 12 federal universities — nine in the north, three in the south” she said.

She described President Jonathan as the soul of a new Nigeria,

She urged Nigerian women to reject political parties that will take steps to return women development to the dark ages by reducing the number of women in political positions.

“The March 28 Presidential Election must be an exercise to take Nigeria to the next level and a direction towards sustained development. We must encourage President Jonathan to continue by voting for PDP” she added.