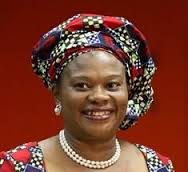 …Without doubt, she will be greatly missed

President Goodluck Jonathan has received with shock and sadness, news of the sudden and untimely death of Professor Dora Akunyili, former Minister of Information and Communications.

The former Minister of Information who had also served as Director General, National Agency for Food and Drug Administration (NAFDAC) passed away at an Indian hospital early morning today.

President Jonathan said the late “Akunyili will live long in the memories of those who were privileged to know her as a diligent professional, a public-spirited and forthright public officer, and as a person of great convictions.”

A statement by Presidential Spokesman, Dr. Rueben Abati, said the President considered “her contributions to nation-building while she served as the Director-General of the National Agency for Food and Drug Administration and Control (NAFDAC), and as Minister of Information and Communications, particularly invaluable.”

According to the statement, “it is sad that her death has come at a time she was making further efforts to help sustain and strengthen the unity and stability of the country in her capacity as a member of the on-going National Conference. Without any doubt, she will be greatly missed.”

President Jonathan commiserates with the Akunyili family, the government and people of Anambra State, members of the National Conference and all her loved ones.

He prays that the Almighty in His infinite mercies will grant them the fortitude to bear the irreparable loss of this truly distinguished citizen and patriot.

Akunyili Was an Amazon -Governor Amosun

In a statement by his Senior Special Assistant on media, Mrs Olufunmilayo Wakama, the governor, who expressed shock and disbelief at the news of the death of the one time director general of the National Agency for Food and Drug Administration and Control (NAFDAC), at the age of 59 years, said she deserves special mention among nation builders in Nigeria.

The governor lamented the death of the foremost Professor of Pharmacy, saying her wealth of experience is mostly needed, especially at the on going National Conference, where she was a delegate.

Amosun recalled her achievements at NAFDAC, noting that she waged a successful war against counterfeit and fake drugs, thus becoming a terror to fake drugs cartels.

“Also, as minister of Information during the administration of the late President Umaru Musa Yar’adua, she did her best in promoting and projecting Nigeria when she initiated the Rebrand Nigeria Project. I remember the slogan ‘Nigeria: Good People, Great Nation’.

“Knowing her, she would have done her best, yet again to chart the way forward for Nigeria at the National Conference. She has certainly left her footprints on the sands of time,” the governor said.

Obi, in a statement said, “On behalf of the Akunyili’s family, I wish to officially confirm the death of Prof. Mrs Dora Akunyili in a Specialist Cancer Hospital in Indian this morning at 10 am, Nigerian Time, after a two-year battle with cancer.

“In spite her illness, she was unwavering in her believe in a better Nigeria that was why she defied her condition and was part of Anambra State Handover Committee and the National Conference.

“The last time I visited her in India, even when she needed all the prayers herself, she was full of concern for Chibok girls, security and other challenges facing the country and told me that she remained prayerful for the release of those girls and for God to help President Goodluck Jonathan to overcome all the challenges facing the Nation.

“She therefore urged all Nigerians to remain prayerful and committed to building a better society for our children. We all prayed together and I promised to be visiting her every month.

“We thank all those who remain fervent in prayers for her recovery and urge them to remain prayerful for the peaceful repose of her soul.”

NAFDAC
Then came 2001. President Olusegun Obasanjo wanted to appoint a director-general for the National Agency for Drug and Food Administration and Control (NAFDAC) and asked for the recommendation of an honest Nigerian pharmacist. Akunyili’s name promptly came up. Someone who had heard about her PTF record recommended her.

There was a little problem, a Nigerian problem. Objections were raised that the minister of health, Prof. ABC Nwosu, was an Igbo from Anambra State and NAFDAC, being a powerful agency under the ministry, should not be headed by another Igbo from Anambra.

It was also argued that the market for fake and substandard products were controlled by the Igbo, with Onitsha – also in Anambra State – a major centre for the illicit business. She was going to protect “her people”, the antagonists said.

Obasanjo, stubborn to the cause, ignored the observations and appointed her. She went on to do a credible job and ended up as one of the most outstanding public officers in Nigeria’s history, celebrated locally and globally.

She had lost a sister to fake drugs, and that was perhaps the impetus she needed to go on the offensive.

Meanwhile, Akunyili always went abroad for check-ups and she was always given an all-clear. She continued to look robust and energetic, and took up another government job as minister of information and communications.

But on July 13, 2013, something strange happened to her. She was preparing to travel to the United States to receive an award. The following day was her birthday. Her 59th, precisely. Then she fell ill. She was physically weak and having pains. She decided to go ahead with her trip and attend to her health in the United States.

It was while she was there that new checks were carried out. Alas, she had cancer. The original diagnosis in 1998 was right. But the diagnosis at the point of surgery was wrong.

She became seriously ill and there were fears she could lose her life. She was in the hospital for months and only returned to Nigeria this year when the doctors said she was improving.

Her last public appearance was at the National Conference in Abuja, where she was a delegate. Pictures of a frail-looking Akumyili soon went viral on the internet.

Though, the actual diagnoses could not be ascertained, there are several reports pinpointing cervical.

Globally, cervical cancer is the second most common and the fifth deadliest cancer in women, according to the World Health Organisation (WHO).

Akunyili died on June 7, 2014 in India after surviving many death rumours.