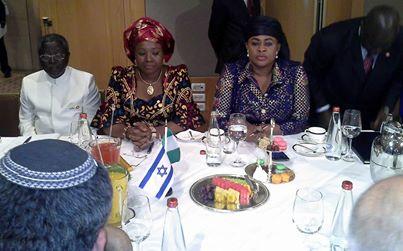 President Goodluck Jonathan yesterday succumbed to the demands by the Anti-Corruption Network when he stopped the embattled minister of Aviation, Mrs Stella Oduah from signing the Bilateral Aviation Service Agreement BASA with Isreal.

Oduah is currently under investigation over her role in the purchase of two armoured cars at the cost of N255million. A presidential panel was set up to probe the allegations against Oduah, just as the parliament is also investigating the matter which has attracted public outcry.

Official signing of the BASA is one of highlights of President Jonathan’s activities in Isreal where he is attending this year’s christian pilgrimage.

Though, Oduah is also in Isreal, the acting foreign affairs minister of Nigeria, Prof. Viola Onwuliri, signed for Nigeria, while the deputy foreign minister of Israel, Mr Zeev Elkin signed for his country.

This laid to rest the heated debate about the propriety of Oduah signing the  BASA agreement on behalf of Nigeria as earlier purported in a statement Mr Joe Obi, special assistant (media) to the aviation minister.

Obi in a statement had said that  the“Aviation Minister Princess Stella Oduah will sign on behalf of Nigeria while her Israeli counterpart will sign for his country. Oduah left Abuja this morning to the State of Israel for the event.”

Also, the two pictures sent in from Israel by Mr Yakubu Datti, spokesperson for aviation parastatals, showed only Onwuliri and not Oduah signing the agreement.

Also yesterday, Jonathan sought the support of Israel in the fight against terrorism.

He said “I seek the cooperation of your country to confront the security threat from terrorist groups that my country is now facing. There is no doubt that Israel has had decades of experience in combating terrorism. Nigeria can benefit tremendously from your experience in this area,” Jonathan told Peres, who promised that Israel will help Nigeria in whatever way possible as both countries face the common menace of terrorism.