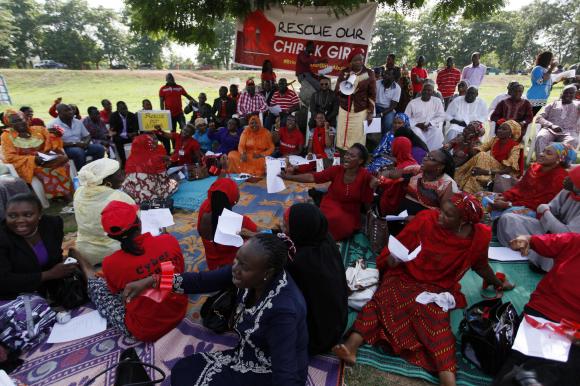 Nigeria’s President Goodluck Jonathan has cancelled his first visit to the village from which more than 200 schoolgirls were abducted by Islamist rebel group Boko Haram a month ago due to security fears, senior government sources said on Friday.

Jonathan will instead fly directly from the capital Abuja to Paris on Friday for a regional summit to discuss the Boko Haram insurgency and wider insecurity and will not now make a stop in the northeastern village of Chibok, said one of the sources.

But the Presidency has denied any plan to travel to Chibok, saying there was no such plan.

Presidential Spokesman, Reuben Abati , dismissed as rumour the said trip saying, the presidential movement schedule did not reflect such.

“Every trip by the President is usually pre-announced. The Presidency did not at any time announce a trip to Chibok today. Ignore rumours.

“The statement issued by my office yesterday (Thursday) indicated very clearly that the President is scheduled to travel to Paris today (Friday).

“It is therefore wrong and malicious to allege that a non-existent trip has been cancelled.”

But agency report said, “The president was planning to go but security advised otherwise on the visit,” said the source of the last-minute decision to cancel the Chibok part of the trip.

Some Nigerians have criticized the government’s initial response to the plight of the girls, who were abducted on April 14, and U.S. officials this week said the government had done too little to adapt to the threat posed by Boko Haram.

Jonathan asked France last week to arrange a security summit with neighbors Chad, Cameroon, Niger and Benin, and officials from the United States, Britain and the European Union to discuss a coordinated response. The summit will take place on Saturday.

Jonathan, the former vice-president, assumed the presidency of Africa’s most populous nation in 2010 on the death in office of his predecessor Umaru Yar’Adua and won an election the following year. Nigeria will go to the polls again next year.