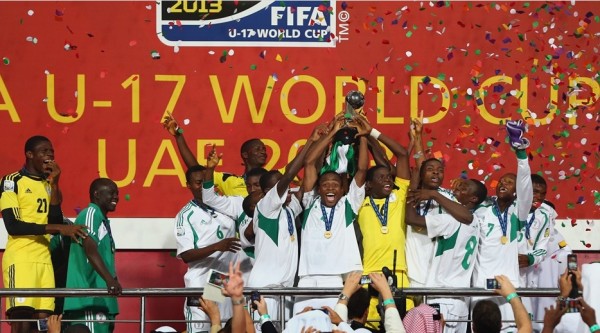 President Goodluck Jonathan has announced cash rewards and national honours award for the Golden Eaglets and their handlers for their victory in the FIFA U-17 World Cup won last Friday in the UAE.

At a reception organised for the Under 17 national team on Sunday in Abuja, the President who was visibly elated commended the Eaglets for the honour they brought to Nigeria as he lifted the FIFA Under-17 World Cup trophy.

Jonathan announced a cash reward of N2 million to each player at the special reception in honour of the victorious Golden Eaglets, held at the Banquet Hall of the Presidential Villa in Abuja.

The team’s Doctor, Physiotherapist, Secretary, and the Chief Technical Officer were rewarded with N500,000 each.

Also, the Team Coordinator, Media Officer and Curator were given N300,000 each.

The President also said that the players with their handlers and some key officials of the Nigeria Football Supporters Club would be given national honours at a later date.

The President extolled the team’s dedication, discipline and spirit of sportsmanship, noting that they brought honour to the nation.

He said ”with commitment and hard work, from being the second best in Africa, the Eaglets had transformed to the best in the world by winning the World Cup”.

Jonathan noted that with the consistent winning of five major tournaments in the last two years, Nigeria had recorded its golden era in sports.

The President attributed the success in the sector to the pro-active measures and policy action taken by his administration after the the country’s disappointing performance at the 2012 London Olympics.

He assured that his administration would continue to provide necessary support in terms of facilities and funding to the sports sector.

”The victory of the Eaglets was for the whole of Africa and the beginning of the revival in the nation’s sports sector,” Jonathan said.

He also charged stakeholders in the sector to harness the potentials of the victorious Eaglets for greater successes.

Speaking earlier, the Minister of Sports, Bolaji Abdullahi, said that the success recorded by the team was not by accident but as a result of a system reconstructed to deliver results.

He said the process of selecting the victorious 19 players was rigorous and competitive, devoid of favouritism.

Abdullahi said the successes recorded so far in the sports sector in the last two years had placed Jonathan as the most successful President in Nigerian sports history.

”The victorious Golden Eaglets team is not just a team but a project and their winning will not be the end but a beginning of greater victory for the nation,” he said.

Before the President’s speech, the captain of the team, Musa Mohammed, had presented the cup to Abdullahi, who in turn presented it to the President.

The Ambassador of Mexico to Nigeria, whose country played the final match with the Eaglets, was also at the event.

He presented the home and away jersies of his country’s national football team to the President in a show of spirit of sportsmanship.

Vice-President Namadi Sambo, the Senate President, Sen. David Mark, and his Deputy, Sen. Ike Ekweremadu, were also at the reception.

Others at the event included the Speaker of the House of Representatives, Hon. Aminu Tambuwal and his Deputy, Hon Emeka Ihedioha.

Also at the event were state governors such as Godswill Akpabio of Akwa Ibom, Jonah Jang of Plateau, Babangida Aliyu of Niger, Liyel Imoke of Cross Rivers, ministers and presidential aides.