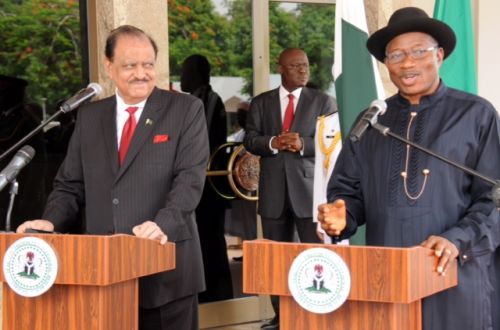 JOINT STATEMENT ISSUED AT THE END OF THE BILATERAL TALKS BETWEEN THE FEDERAL REPUBLIC OF NIGERIA AND THE ISLAMIC REPUBLIC OF
PAKISTAN ON TUESDAY 10 JUNE, 2014

2. During the visit, President Mamnoon Hussain held Bilateral Talks with President Jonathan. The two leaders had an in-depth exchange of views on Nigeria-Pakistani relations as well as on other issues of common interest. They charted the course of future closer cooperation in various fields.

3. They also reviewed the achievements recorded especially in the field of military cooperation and resolved to foster closer ties in the areas of agriculture, trade, textiles production, pharmaceutical manufacturing and oil and gas. They further agreed to expand cooperation in agro-technical training; seed multiplication and processing of agricultural produce.

4. They noted that there were further prospects for deeper engagement between the two countries and resolved to encourage their organized private sectors to explore further avenues for greater interaction, towards the mutual benefit of both countries.

5. The two sides commended the exchange of high level visits, and resolved to maintain the momentum of exchange of visits at all levels in order to promote mutual understanding and trust.

6. Both sides regarded each other’s development as a new opportunity to further expand bilateral cooperation. They committed themselves to deepening cooperation in various fields and, on that basis, to keep opening up new avenues for cooperation. They pledged to intensify efforts to jointly upgrade strategic cooperation between the two countries.

7. They noted the potential for increased mutual investments and agreed to provide a favourable environment for investors from both countries. The two sides agreed to exchange regularly information on available investment opportunities. Recognizing the enormous growth potential of Pakistan’s economy, the Nigerian side also expressed readiness to consider investments in Pakistan.

8. Both parties agreed to take further steps to implement all the agreements signed between the two countries for the mutual benefits of their people. They acknowledged the imperative of upholding the rights and dignity of their nationals in each other’s country.

10. Both sides agreed that, as members of the United Nations and other international bodies, they would continue to strengthen coordination and cooperation in those organizations, to promote international peace and security. The two sides agreed to cooperate to manage the menace of insurgency and terrorist activities.

11. The two sides consider the visit of the Pakistani President to Nigeria, undertaken to reciprocate an earlier visit by President Jonathan, as symbolizing a reawakening of the potentials of the two countries to contribute their quota to the advancement of the developing countries. They agreed to promote all-round concrete cooperation in poverty reduction, human resources development, cultural exchanges and environmental protection.

12. The two sides look forward to the future with confidence that a new chapter in their bilateral ties was being written whereby both countries would experience a remarkable turn-around in their socio-economic development.