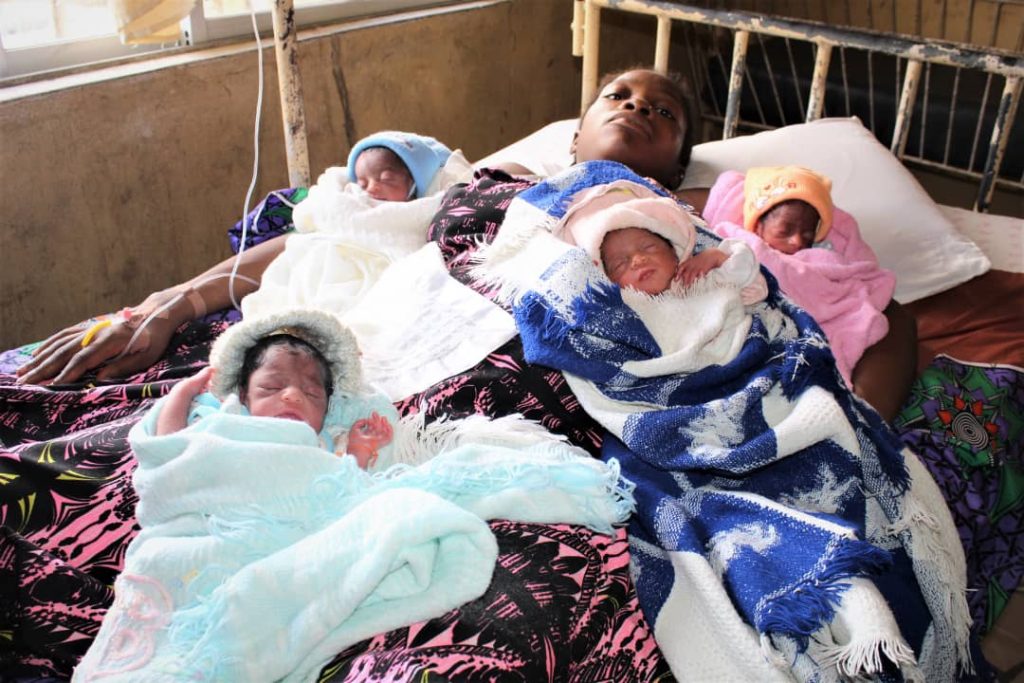 News Investigators/ A 28-year-old unemployed woman, Mrs Mariam Akinkitan, has given birth to a set of quadruplets in Badagry, Lagos State.

“She has already delivered one out of the four babies in a private hospital but unfortunately the next baby was coming through line cross.
“This is what we call transverse line in medical terminology; so when she was rushed down to my hospital and I discovered it to be transverse line, we opted for Caesarean Delivery to save the mother and the babies.
“The three scan she did indicate three children, so with the belief that the babies would be triplets, we started operating her.
“We brought out the second baby at 6:16a.m, fortunately, she cried out immediately, so there was no problem of resuscitating her or time wasting.
“The third baby was brought out at 6:17a.m, but after bringing her out, I discovered that I was feeling something hard when I wanted to bring out the placentae.
“I told the nurse that brought her that something was still inside the womb, but she said the scan read three babies.

“So at 6:18a.m, I brought out the fourth baby, the only male and with the highest weight among them. He was 1.7 kilograms,” the doctor said.

According to the medical director, the mother and the quadruplets are clinically alright.

Meanwhile, Mr Samson Akinkitan, father of the quadruplets, has appealed to well meaning Nigerians to help him secure good accommodation to enable the children to grow up in conducive environment.
Akinkitan, a 35-year-old taylor who lives at Iyana-Era, Lagos, said that his one-room apartment would not be conducive for the children.

“Before their birth, I have two children already;, first born is six years and second three years, with my aged mother.

“The one-room apartment is not enough to bring up them because we are five before their birth.
“The little amount I am getting from tailoring work is not enough to get a good accommodation for my quadruplets.

“I’m also begging Nigerian philanthropists and government at all levels to support me in upbringing the quadruplets.
“I am a tailor, I can’t further my education due to lack of money, I don’t want my children to have same fate,” he said.

The mother of the quadruplets, Mariam, thanked the well-wishers that had been visiting her and her quadruplets with gifts in the hospital.
“The wife of the Chairman, Badagry Local Government, Mrs Ramota Onilude and the founder of Sesi Whingah Foundation, Mr Sesi Whingah, have come to visit us
“We are very grateful for their benevolence and I prayed that God will replenish their pockets,” she said. (NAN)