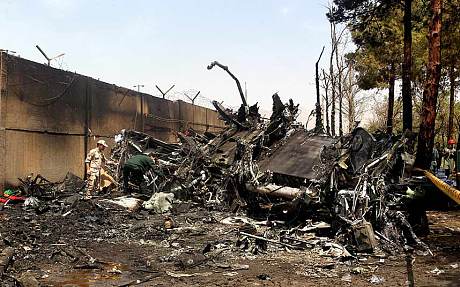 The Taban Airlines plane was headed to the eastern city of Tabas, the IRNA and Fars news agencies said, and crashed at 9.18 a.m. (0448 GMT).

Reports said the passenger jet plummeted into a suburb of the Iranian capital shortly after take off today, killing at least 38 people when it exploded near a busy market.

The plane was heading to the eastern city of Tabas, according to Iranian news agencies, but crashed at 9.18am local time after leaving Mehrabad airport.

It triggered a fireball when it smashed into the neighbourhood of Azadi, only a few hundred metres from a row of shops.

“The scene was terrible,” said one eyewitness. “But we were lucky because there was a market 500 metres away and a lot of people were there.”

Picture posted online by local newspapers showed how close the carnage had come to killing residents living in the area.

The Shargh Daily tweeted an image of the plane’s twisted tailfin, standing upright in the middle of a motorway. Another showed an enormous plume of black smoke billowing over the crash site, as startled drivers stood by their cars staring at the scene.

Iran’s deputy transport minister, Ahmad Majidi, said the Antonov An-140 turboprop plane had 40 passengers, including six children, and eight crew on board, and he put the death toll at 38.

Officials initially said all on board had been killed, but local news agencies later reported that 37 bodies were sent to the morgue and nine people were hospitalised, two of them with critical injuries.

Mehrabad airport is near central Tehran and it is the country’s busiest domestic hub.

Most international passenger flights take off from Tehran’s Imam Khomeini International Airport, which is located further west of the capital.

Alireza Jahangirian, the head of Iran’s civil aviation authority, said: “The plane crashed in trees. There were no casualties on the ground.”

An investigation is under way, he added