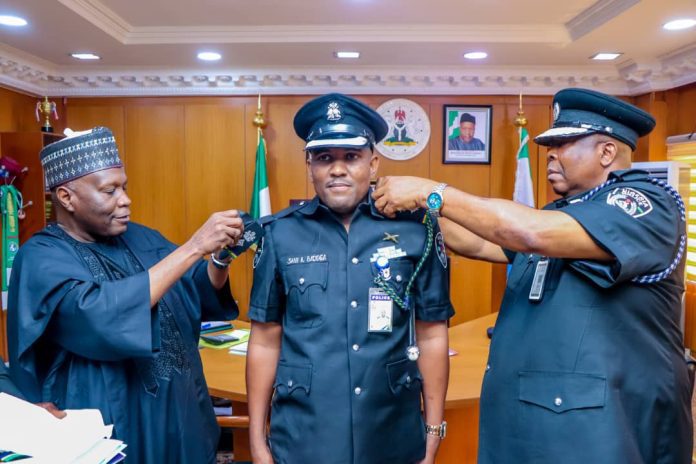 Also decorated by the Governor was the Gombe Divisional Police Officer, DPO, Usman Mohammed who also got promoted to the Rank of CSP.

In a statement by the Director-General (Press Affairs) Government House, Ismaila Uba Misilli said the governor was assisted by the Commissioner of Police, Gombe State Command, CP Ishola Babaita in performing the exercise.

Mr Inuwa, in his remark, noted the promotion was a result of hard work, commitment, dedication and meritorious service.

“This promotion is an appreciation of your hard work, commitment and dedication to duty; that is why we all gathered here to perform this brief but significant ceremony,” the governor said.

He expressed satisfaction with the performance of his CSO since assuming duty in 2019, saying his promotion did not come to him as a surprise.

He congratulated the newly elevated officer and urged him to continue to discharge his duties in line with ethical conduct.

Governor Inuwa expressed the conviction that the Nigerian Police and other security agencies operating in Gombe are delivering their expected tasks to ensure the State continues to enjoy the prevailing peace.

“From the citation of the two gentlemen, it is clear that they merited the promotion to their new ranks”.

“On behalf of my humble self, my family, the government and the entire good people of Gombe state, I congratulate you for achieving this feat”.

Earlier in his brief remarks, Mr Babaita congratulated the newly decorated officers and charged them to improve further in their respective duties. The Police Commissioner assured that the Police and other security agencies will continue to ensure close working relationship with the state government towards