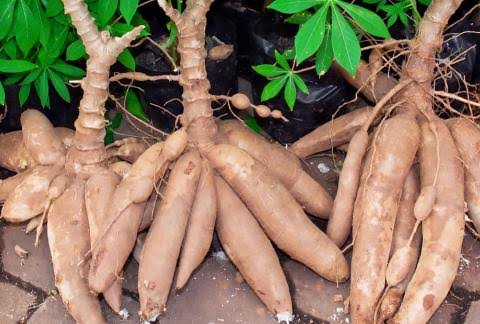 ABUJA, International Institute of Tropical Agriculture (IITA) says cassava remained one of the most consumed food crops in Africa and the potential market for cassava product is huge.

Dr Adebayo Abass, the Cassava Compact Leader, IITA, said this at the cassava investment forum on Thursday in Abuja.

He said that it was projected that an increase of 5,933.4 tonnes per country per year above the current production was required for food by 2025.

Abbas said it had been recognised that cassava would become agro industrialised across the African continent to achieve key poverty reduction and economic growth target.

According to him, Africa imports annually about 50 million tonnes of food such as rice, wheat, maize and sugar worth over 35 billion dollars.

He said such food import had been projected to increase to nearly 100 billion dollars by 2025.

Abbas said that such increase in food import was a risk to the balance of trade for most African countries, adding that it also represented a unique opportunity for crops such as cassava.

”Cassava grow well in the continent because it can replace up to 80 per cent of our food import, especially in processed forms such as flour, native and modified starches, sweeteners and beverages,” he said.

He said that for cassava to become an important carbohydrates source in Africa, the triangle of productivity, processing and rural infrastructure must be met.

According to him, farmers must have access to technologies to raise cassava productivity from the current 10 to 15 million tonnes per hectare in many African countries to 20 to 25 million tonnes.

”Incentives for investment in processing need to be made through the development of robust supply chains and government policies that reduce transaction costs for the processed.

”Rural infrastructure is also as important as technology or investment in cassava processing,” he said.