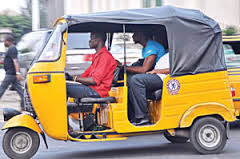 By Tom Garba, Yola – The 23rd Brigade of the Nigerian Army, Yola has announced a ban on the operations of KEKE NAPEP during the Eid Eil Kabir festival across Adamawa state.

A statement signed by the Assistant Director Army Public Relations Officer of the command, Captain Ja’afaru Mohammed Nuhu, said the measure was taken to safeguard life and properties of residents of the state.

“Headquarters 23 Brigade Yola wishes to bring to the notice of general populace of Adamawa State on ban of use of KEKE NAPEP during Eid el Kabir celebration with effect from Wednesday 23rd September, 2015 by 6:00pm until Sunday 27 September 2015 by 6:00pm,” the statement said.

The Nigerian Army also warned vehicle owners to desist from parking them near the Eid grounds just as it urged all residents of the state to assist the Army in reporting suspicious persons and movement to nearest security posts.