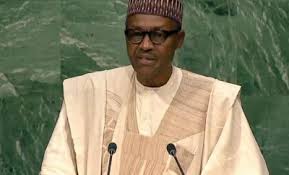 By Nuel Suji, Abuja – President Muhammadu Buhari has urged Nigerians to be more patient with his administration, assuring that early signs have shown that the nation would soon see the change it promised the nation.

Buhari, in his address to the nation on the occasion of her 55 year Independence anniversary, listed improvement in the power sector, a better result yielding efforts in the anti-terrorism war and sanitized petroleum supply system  as areas where the nation had already experienced change.

“In the meantime, improvement in the power supply is moderately encouraging. By the same token, supply of petrol and kerosene to the public has improved throughout the country. All the early signs are that within months the whole country would begin to feel a change for the better,” he said.

The President disclosed that he had directed the auditing of the revenue generating agencies including NNPC, FIRS, CBN, NCC and Customs in order to achieve better service delivery to the nation.

“Prudent housekeeping is needed now more than ever in view of the sharp decline in world market oil prices. It is a challenge we have to face squarely. But what counts is not so much what accrues but how we manage our resources that is important.”

The president said it was a matter of style for the administration to approach governance methodically, saying “impatience is not a virtue. Order is more vital than speed. Careful and deliberate decisions after consultations get far better results.

Buhari also acknowledged former President Goodluck Jonathan, his immediate predecessor in office, saying his decision to accept the result of the last Presidential election results in good faith saved the nation from catastrophy.

Full detail of the Presiedent Speech below:

October 1st is a day for joy and celebrations for us Nigerians whatever the circumstances we find ourselves in because it is the day, 55 years ago; we liberated ourselves from the shackles of colonialism and began our long march to nationhood and to greatness.

No temporary problems or passing challenges should stop us from honoring this day. Let us remind ourselves of the gifts God has given us. Our Creator has bequeathed to us Numbers – Nigeria is the ninth most populated country on the planet. We have in addition:

We have all the attributes of a great nation. We are not there yet because the one commodity we have been unable to exploit to the fullest is unity of purpose. This would have enabled us to achieve not only more orderly political evolution and integration but also continuity and economic progress.

Countries far less endowed have made greater economic progress by greater coherence and unity of purpose.

Nonetheless, that we have remained together is an achievement we should all appreciate and try to consolidate. We have witnessed this year a sea change in our democratic development. The fact that an opposition party replaced an entrenched government in a free and fair election is indicative of the deeper roots of our democratic system. Whatever one’s views are, Nigerians must thank former President Jonathan for not digging-in in the face of defeat and thereby saving the country untold consequences.

As I said in my inaugural speech, I bear no ill will against anyone on past events. Nobody should fear anything from me. We are not after anyone. People should only fear the consequences of their actions. I hereby invite everyone, whatever his or her political view to join me in working for the nation.

My countrymen and women, every new government inherits problems. Ours was no different. But what Nigerians want are solutions, quick solutions not a recitation of problems inherited. Accordingly, after consultations with the Vice President, senior party leaders and other senior stakeholders, I quickly got down to work on the immediate, medium-term and long-term problems which we must solve if we are to maintain the confidence which Nigerians so generously bestowed on us in the March elections and since then.

As you know, I toured the neighboring countries, marshal a coalition of armed forces of the five nations to confront and defeat Boko Haram. I met also the G7 leaders and other friendly presidents in an effort to build an international coalition against Boko Haram. Our gallant armed forces under new leadership have taken the battle to the insurgents, and severely weakened their logistical and infrastructural capabilities. Boko Haram are being scattered and are on the run. That they are resorting to shameless attacks on soft targets such as I.D.P. camps is indicative of their cowardice and desperation. I have instructed security and local authorities to tighten vigilance in vulnerable places.

On power, government officials have held a series of long sessions over several weeks about the best way to improve the nation’s power supply in the safest and most cost effective way. In the meantime, improvement in the power supply is moderately encouraging. By the same token, supply of petrol and kerosene to the public has improved throughout the country. All the early signs are that within months the whole country would begin to feel a change for the better.

Preliminary steps have been taken to sanitize NNPC and improve its operations so that the inefficiency and corruption could be reduced to a minimum. Those of our refineries which can be serviced and brought back into partial production would be enabled to resume operations so that the whole sordid business of exporting crude and importing finished products in dubious transactions could be stopped.

In addition to NNPC, I have ordered for a complete audit of our other revenue generating agencies mainly CBN, FIRS, Customs, NCC, for better service delivery to the nation. Prudent housekeeping is needed now more than ever in view of the sharp decline in world market oil prices. It is a challenge we have to face squarely. But what counts is not so much what accrues but how we manage our resources that is important.

We have seen in the last few years how huge resources were mismanaged, squandered and wasted. The new APC government is embarking on a clean up, introducing prudence and probity in public financing.

At an early stage, the federal government addressed the issue of salary arrears in many states, a situation capable of degenerating into social unrest. The APC government stepped in to provide short-term support to the owing states and enabled them to pay off the backlog and restore the livelihood of millions of Nigerians.

Fellow Nigerians, there have been a lot of anxiety and impatience over the apparent delay in announcement of ministers. There is no cause to be anxious. Our government set out to do things methodically and properly. We received the handing over notes from the outgoing government only four days before taking over. Consequently, the Joda Transition Committee submitted its Report on the reorganization of Federal Government structure after studying the hand over notes. It would have been haphazard to announce ministers when the government had not finalized the number of ministries to optimally carry the burden of governance.

Anyway, the wait is over. The first set of names for ministerial nominees for confirmation has been sent to the senate. Subsequent lists will be forwarded in due course. Impatience is not a virtue. Order is more vital than speed. Careful and deliberate decisions after consultations get far better results. And better results for our country is what the APC government for CHANGE is all about.

I would like to end my address this morning on our agenda for CHANGE. Change does not just happen. You and I and all of us must appreciate that we all have our part to play if we want to bring CHANGE about. We must change our lawless habits, our attitude to public office and public trust. We must change our unruly behavior in schools, hospitals, market places, motor parks, on the roads, in homes and offices. To bring about change, we must change ourselves by being law-abiding citizens.