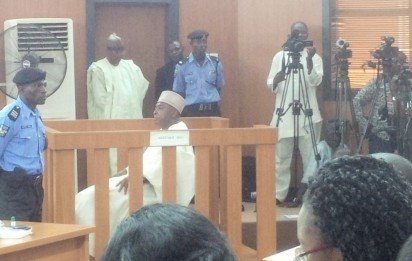 By Sadiq Umar, Abuja – The Senate President, Sen. Bukola Saraki has pleaded not guilty to the 13-count charges of fraud and false assets declaration levelled against him by the Code of Conduct Bureau, even as protesters gathered outside the Court premises in support of the embattled Senate President. 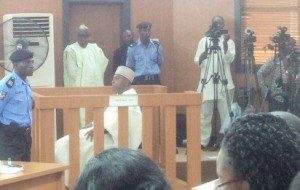 Saraki who appeared before the Code of Conduct Tribunal in Abuja Tuesday after failed attempts to stop his trial by the Tribunal, pleaded not guilty when the charges were read.

He was granted bail on self-recognition.

The Tribunal then adjourned the false assets declaration case to October 21, 2015 for further hearing.

When proceeding began, the prosecution counsel, Rotimi Jacobs argued the need for Saraki for the need to take his plea from the dock in accordance with the rule of law.

But counsel to the Senate President, Joseph Daudu argued to the contrary, saying the administration of the criminal justice system does not apply at the Tribunal, hence Saraki should take his plea from wherever he is already seated at the Tribunal.

When asked to take his plea, Saraki told the court that he was puzzled at the insistence on his appearance.

“I believe that I am here as the Senate president to indicate my respect for the tribunal. I am puzzled why I am being compelled”.

Before pleading not guilty, the Senate President reiterated argument made by his counsel as it relates to the provision of Paragraph 18 of the 5th Schedule of the Constitution, stressing the need for proper briefing.

Justice Danladi Umar, Chairman of the Tribunal, then adjourned sitting to allow Saraki receive proper brief of the 13-count charge against him.

Other charges are that the Senate President failed to declare some assets he acquired while in office as governor.

He is also accused of acquiring assets beyond his legitimate earnings and operating foreign accounts while being a public officer – governor and senator, in violation of Sections of the 5th Schedule of the Constitution of the Federal Republic of Nigeria 1999, as amended.

The offenses also breached Section 2 of the Code of Conduct Bureau and Tribunal Act and punishable under paragraph 9 of the 5th Schedule.

The charges were prepared by M.S. Hassan, a deputy director in the office of the Attorney General of the Federation.

If found guilty, the offenses are punishable under Paragraph 18 of Part 1 of the 5th Schedule of the Constitution which prescribes vacation of office or seat in any legislative house, as the case may be; (b) disqualification from membership of a legislative house and from the holding of any public office for a period not exceeding ten years; and (c) seizure and forfeiture to the State of any property acquired in abuse or corruption of office among others.