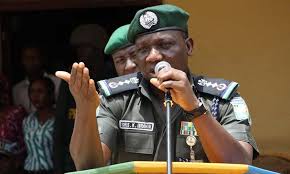 (News Investigators) Vice-President, Yemi Osinbajo has met with the Inspector-General of Police (IGP), Mr. Ibrahim Idris, at the Presidential Villa, Abuja over the Monday protest by armed policemen.

The meeting held shortly after the news some policemen were protesting against non-payment of their allowances in Maiduguri, Borno State was broken.

It was not clear if Mr. Idris was summoned over the protest or he decided on his own to brief Prof. Osinbajo on the development.

The meeting, which was held inside the Vice-President’s office, came at a time President Muhammadu Buhari was attending the 31st Ordinary Session of the African Union Assembly of Heads of State and Government in Mauritania.

The agenda of the meeting was not made public. After the meeting, the IGP declined to speak with journalists.

It was learnt that the officers were posted to the state in January to beef up the security of the troubled State, which had been bedevilled by Boko Haram insurgency for about a decade.

The protesting policemen, who were fully armed, marched in their hundreds to the Borno State Police Headquarters located on a major highway in the town.

The protesting policemen barricaded the highway, shooting sporadically into the air and scaring off motorists.

Some of the students and workers had to turn back to their homes as they could not pass through the barricade.

Some of the policemen, who spoke to journalists on condition of anonymity, lamented that since January when they were deployed in the state on a special operation, they had not been paid their allowances.

They complained that many of them had had to endure inhuman treatment as they had to sleep on the corridor of the office on returning from duty at night.

When contacted on the development, the Borno State Commissioner of Police Damian Chukwu, said he was aware of the protest.

He however said the delay in the payment of the policemen’s allowances might not be unconnected with the late signing of the budget.

It was learnt that the IG waded into the crisis by directing the Commissioner in charge of the Police Mobile Force to immediately relocate to Maiduguri to address the crisis.

In a press statement issued in Maiduguri, the Borno State Police Command Spokesperson, Edet Okon, said, “The IG has consequently directed the Commissioner of Police in charge of Police Mobile Force to relocate to Borno State and address the situation.”

He added, “The Borno State Government has also intervened and pledged to assist to better the condition of the visiting PMF personnel.

“The Police High Command is aware of their plight and liaising with appropriate Federal Government agencies to address the situation.

“We are hopeful that since the 2018 budget has been signed by the Presidency, the allowances will be paid soon.

“Meanwhile, efforts by officers of the command yielded results as the situation was brought under control. Members of the public are, therefore, encouraged to go about their lawful activities without any fear or apprehension.”

Still, the Force Spokesman, acting DCP Jimoh Moshood, also in a statement in Abuja denied reports that riot policemen protested over the delay in the payment of their special duty allowances in Maiduguri on Monday.

Moshood said that the policemen simply visited the Borno State Police Command headquarters to enquire about the delay of their allowances.

This claim contradicted the situation on ground, as the policemen were actually seen in pictures protesting./The Punch