Home Featured Posts IGP Appears Before Reps, Refuses To Recognize Tambuwal As Speaker
Facebook
Twitter
Google+
Pinterest
WhatsApp
The Inspector General of Police, Mr. Suleiman Abba, Wednesday stunned the House of Representatives Committee probing the alleged invasion of the National Assembly by the police when he refused to recognize the speakership position of Hon. Aminu Tambuwal.
Abba insisted the question of Tambuwal’s Speakership of the House remains a subject of litigation which he would not want to dabble into, a position that forced the Committee to end the session abruptly.
The House Committee on Police Affairs was mandated by the House to meet with the Inspector General of Police Suleiman for explanation on the attempt by policemen to prevent the speaker from accessing the House last week Thursday.
But, Mr. Abba while f‎ielding questions on during the session referred to the Speaker as Alhaji Aminu Tambuwal without recognising him as speaker. 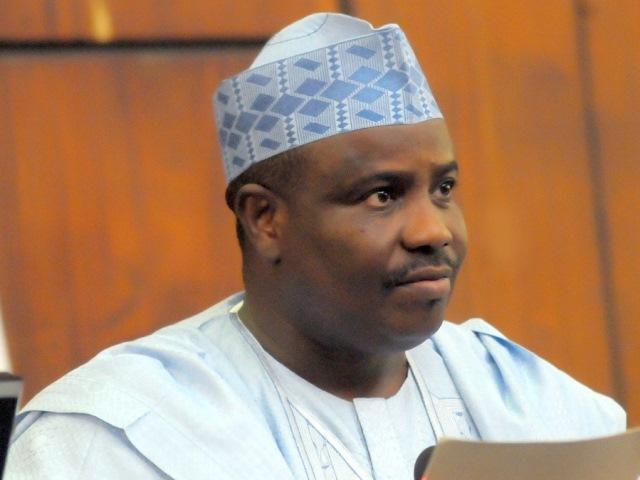 The decision by Abba not to retract his  statement attracted the anger of members who asked him to retract his statement.
To be sure that they heard the IGP clearly, the Chairman of the Committee, Mr. Usman Bello-Kurmo, asked him a direct question, saying “Is Aminu Waziri-Tambuwal the speaker of the House of Representatives or not?”
The IGP replied, “Mr. Chairman, you know that matters before the courts are subjudice.
“Commenting on them is subjudice until they are disposed of,” he added.
His failure to retract his statement led to the abrupt end of the session by Committee Chairman.
The committee, acting on a House resolution, had summoned Abba to explain why the police shut the gates of the National Assembly against lawmakers on Thursday last week.
During the closure, Tambuwal and many lawmakers were disallowed entry by the police who claimed they were acting on security reports that some hoodlums were planning to breach security at the Assembly that Thursday.
Many of the lawmakers mainly from the opposition All Progressive Congress  scaled the gates to enter the premises and later forcibly took the speaker into the House.
Riot policemen reacted by throwing tear-gas at the speaker and the enraged members.
Earlier, Bello-Kurmo had called for maturity at the start of the meeting, saying that the interest of the country must prevail at all times.
It would be recalled that Tambuwal deflected from the ruling Peoples Democratic Party (PDP) to the Opposition All Progressive Congress (APC)  last month without resigning his speakership, but rather gave a long adjournment to plenary.
Following sharp reactions from PDP, the Inspector General of Police ordered immediate withdrawal of police security attached to the speaker.
The speaker was denied access to the National Assembly last Thursday when the House was reconvened to attend to President Goodluck Jonathan’s request for elongation of state of emergency rule in the northeast where troops are fight insurgents.
However, Tambuwal was forcefully ushered into the House by his colleagues in the opposition with some of them scaling the fence.