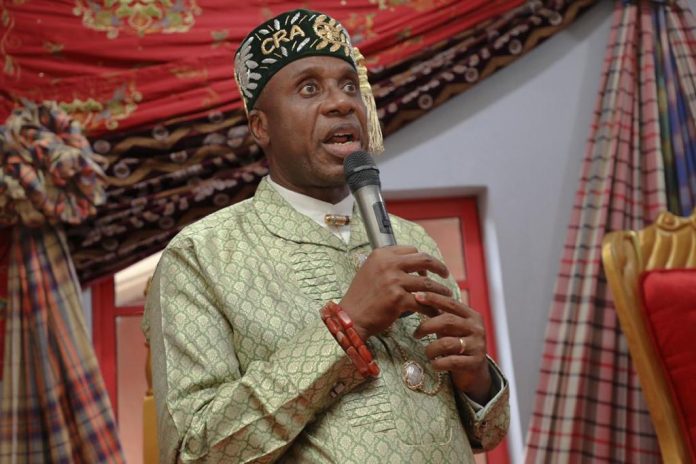 News Investigators/ The Cross Rivers governor, Sen. Ben Ayade has vowed that party’s delegates in his state will vote for the All Progressives Congress (APC) Presidential hopeful, Rt. Hon Chibuike Rotimi Amaechi should he fail in his own aspiration for the party’s presidential ticket.

Ayade who received Amaechi at the Government House in Calabar, capital said Amaechi has paid has done so much for Cross Rivers, adding that he remained grateful for his support for the state.

Similarly, the APC delegates in Cross Rivers vowed to cast their votes in the forthcoming primaries for the transport minister and presidential hopeful, Rt. Hon Chibuike Rotimi Amaechi, saying he has been the their benefactor.

The delegates however said their votes will go to Amaechi only if the State governor, Ben Ayade- a contender to the presidential ticket, fails in his aspiration.
APC Chairman in the state, Barr. Alphosus Eba who spoke on behalf of the delegates said Amaechi has been the benefactor of APC in Cross Rivers, recalling his previous supports to the party in the state.

“There is only one River to cross and this is because our leader the governor is also interested. But happily the governor has said that if it is not him, it must be Amaechi”, he said.

He noted the the transportation minister had done so much for the party. Even during the era of our past governor, you assisted the party. And when our current governor came, you granted 8 ministerial approvals for the take off of Bakassi project”. With all his achievements and benevolence towards the party here, Amaechi is not a hard project to sell,” Eba told the delegates.
He also said that while some persons were destroying the bridges Cross Rivers and Rivers States, “there is the one building the bridges and that man is Amaechi.”
Addressing the delegates earlier, Rt. Hon. Amaechi pledged continued support for the state, urging for support to enable him fly the flag of the party in the 2023 presidential elections.
Chief Amaechi reminded the delegates of his record of achievements first as speaker of the Rivers State House of Assembly when some landmark bills were passed into law under his leadership.

“I’m tested, l’m trusted. I served as speaker for 8years, governor for 7years and minister 7years nows. My records speak for itself. We passed a law to abolish this tradition of forcing a widow to drink water used to bath her dead husband, we outlawed genital mutilation, we passed laws that tackled the nenance of traffic offences.
“I became governor when insecurity was at its peak in Rivers. Our wives were just producing babies, you know why, because the men could not go out. All the places of relaxations were shut because of insecurity. Kidnapping was very serious but l took some drastic measures to address the problems” Amaechi recalled.
He added the infrastructure was key to development, recalling how he also built schools and ran free education. “We got school principals involved and backed it we funding. We employed 13200 teachers.
“We built health centres in virtually all the villages, we employed doctors. We built power, 1766 megawatts of power, he added.
Amaechi reiterated that he is the most qualified among contenders, urging the delegates not to make the mistake to settle for less. “Like l told your governor, there is no second position in this contest. We have to push for the first position. I’m the one to deliver that,” he said.
The Obong of Calabar, … while speaking during a courtesy call on him by the APC Presidential hopeful urged Nigerians to come together to vote someone with the ability to solve the myriad problems confronting the country.

The Obong urged politicians particularly delegates to resist the temptation of voting for money but instead to consider the long term gain which is the development of the country.
Chairman Cross Rivers Council of traditional rulers, His Eminence Etiyen Okon Edet declared total support for Amaechi describing as ‘diligent’ in all his assigned offices.
Quoting from the Holy Bible, the traditional ruler said, “See thou a man diligent in his work, he shall stand among kings.”
He said there are 18 Local Governments in the State with 18 paramount rulers. Calabar alone has 3 kings, the only place in the universe with 3kings
He described the kings as “invisible delegates”. You can see, the chairman is here in our midst, we tell them where to vote. With or without him we decide where our people go. The politicians cannot do it alone,” Etiyem Edet said.
He said he already dreamt of Amaechi becoming the next president.
He however urged the minister of transportation to remind President Muhammadu Buhari about pending matters of Bakkasi and the 76 oil wells, saying those issues are yet to come to an end.