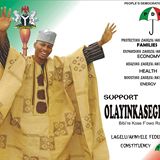 In a bid to familarise himself with the  present  situation of things in his constituency, an aspirant to the House of Rersentatives in the 2015 general elections on the platforem of the Peoples Democratic Party, Hon Olayinka Oladimeji Segelu paid a scheduled visit to some areas in Akinyele/Lagelu federal constituency where he interracted with the people of the grassroots with a view to gathering first hand information on the needs and aspirations of the people.
Hon Olayinka Segelu, an indigene of Eleruko village in Ward 12, Lagelu Local Government Area of Ibadan, said as a  politician who believes in getting to know the aggragate needs of the people before venturing to serve them in any capacity, the series of  the familiariation visits which he started yesterday will prepare him ahead of the huge task of  fighting hard to attaract federal presence to Akintele/Lagelu Federal constituency if he secures the mandate of his people to represent them in the House of Representatives come 2015.
Hon Olayinka Segelu  was received by people  who trooped out in their large numbers from communities including Ogunsowo, Ogunremi, Ogunsina,Osuntade,Arerinole, Alataare, Agbedeyi, Morola, Aba Oyo, Gbaje, Mogaji,Dagbolu and Otun.
The politician had earlier attended the PDP  meeting of ward 12, where he officially briefed  the people on his intention to seek election into the National Assembly to fight for the rights of his people to enjoy basic infrastructure which he said had eluded them over the years.
While speaking further at the meeting,Hon Olayinka Segelu said he was impressed with the commitment of party members and leaders in the constituency. He said it is a sin against God for anybody to abandon the people after being voted into office, promising that he will devote his time and energy to the development of the constituency and constituents before and ater being elected into the House of Rpresentatives in 2015.
Hon Segelu announced to the delight of party members that come February 2014,  he will launch the SEGELU FOUNDATION through which free medical and eye care servicxes will be provided and  many women and youths will be given real  economic empowerment in memory of his late father, Hon Olusegun Oladimeji Segelu who belived in and pursued  economic liberation of the people till he died.
One of the party faithful at the meeting, Mrs Adesomi Aboderin said the people have been taken for granted by politicians since Adegoke Adelabu era resulting in total neglect ot the people of Akinyele Federal Constituency in the scheme of things.She however urged Hon Olayinka Segelu not to forget all his promises to them as the people are ready to support him bcause of his good background.
Mrs Adebomi said if the people of the constituency can have access to good roads, electricity, water and the youths can get jobs, they will know that they are enjoying dividends of democracy.
At the end of the meeting, Hon Segelu visited many community leaders in Oyedeji ,  Lalupon and Apateere including the family of the late PDP chairman in Lagelu Local Government, Elder Samuel Olubode Akinpel