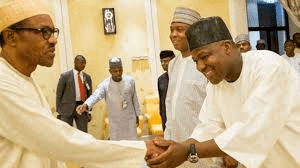 By Sadiq Umar – Speaker of the House of Representatives, Yakubu Dogara on Friday met behind closed door with President Muhammadu Buhari over the budget padding scandal rocking the House.

Mr. Dogara who arrived the State House at about 2:25 pm, went straight into the president’s office where he spent about half an hour.

The speaker emerged at exactly 2:58 pm, to the ambush of State House Correspondents who demanded know if he was worried about the allegations of corruption against his leadership.

Mr. Dogara told reporters budget padding is not an offence and vowing not to step down from office despite growing calls on him to do so.

”I am a lawyer and have been a legislator for a while, I never knew of an offence called budget padding.”

The speaker said budget padding is not an offence against any Nigerian law, challenging the reporters to prove otherwise.

He also said since he has not committed any offence, the question of him resigning “does not even arise. Worried over what? And why should l resign?, Mr. Dogara retorted.