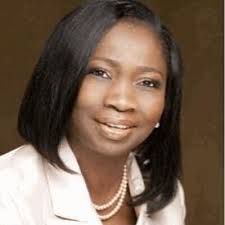 Former member of the House of Representatives, Abike Dabiri-Erewa has dismissed as untrue media reports claiming that she owed Diamond Bank N100 million, saying she knows nothing about the company “Thriller Endeavor”.

Dabiri-Erewa, who was Chairman House Committee on Diaspora expressed shock at the publications, wondering why her was included in the list of bank debtors.

In a statement personally signed by Dabiri-Erewa and released in Wednesday in Abuja, the former House spokesperson said she was thoroughly embarrassed to see her picture on the front page of Punch Newspaper linking her to one Thriller Endeavor Company, claiming her to be a director, owing about 100 Million Naira to Diamond Bank.

She said she does not know anything about the said company, Thriller Endeavor, or its activities, as mentioned in the publication.

According to her, if the company claims I am a director in the said bank, then it has definitely done so without my knowledge and without my permission.

She said further and I quote “if this is the case it’s a case of fraud and will have to be brought to the attention of relevant security agencies, the bank in question, and the Central Bank of Nigeria”

Dabiri-Erewa insisted that she owe nobody any money, not even herself.