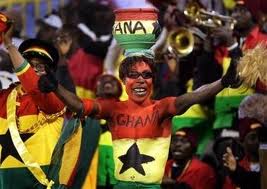 Conflict in West Africa has already generated unfortunate headlines during the World Cup. Now the often untold strife occurring in places like Ghana and Nigeria is having an impact on the ground in Brazil.

According to reports from Ghanaian website All Sports, about 200 Ghanaian soccer fans who attended this summer’s World Cup are seeking asylum in Brazil. Having initially drawn attention when they didn’t return on a charter flight after the Black Stars group stage elimination, the fans have trickled into federal offices in the Brazilian city of Caxias do Sul over the last seven days.

According to the city’s head of police, the “the Ghanaians said they were Muslims who were ‘fleeing the violent conflicts between different Muslim groups.’”

Vanessa Perini Moojen of the Roman Catholic Church’s Migrant Support Center said the asylum-seekers “faced life-threatening situations back home.” She would not elaborate …

Allsports.com.gh earlier reported that almost 240 fans failed to return on the chartered flight that was procured for their trips to support the national team during the World Cup.

More, from the BBC:

Another 1,000 Ghanaians are expected to request refugee status once the tournament is over, police said.

The Brazilian authorities believe many of the Ghanaians are looking for the right to work legally in the country.

“This region – Serra Gaucha – is known as an area of full employment. It has became a magnet for foreign workers,” federal police chief Noerci da Silva Melo said in Caxias do Sul …

Brazilian legislation allows potential refugees to work legally in the country once they have filed for asylum.

The fact that the Ghanaians have entered the country on tourist visas should not be taken into consideration when considering whether to grant them asylum, a Justice Ministry official said.

“Asylum cannot be requested at a Brazilian embassy. The asylum seeker must be in the country to apply,” said Joao Guilherme Granja.

Ghana exited this year’s World Cup with a loss in Brasília to Portugal on June 26. Caxias do Solis is located just over 1200 miles of the capital, in the southern state of Rio Grande do Sul.