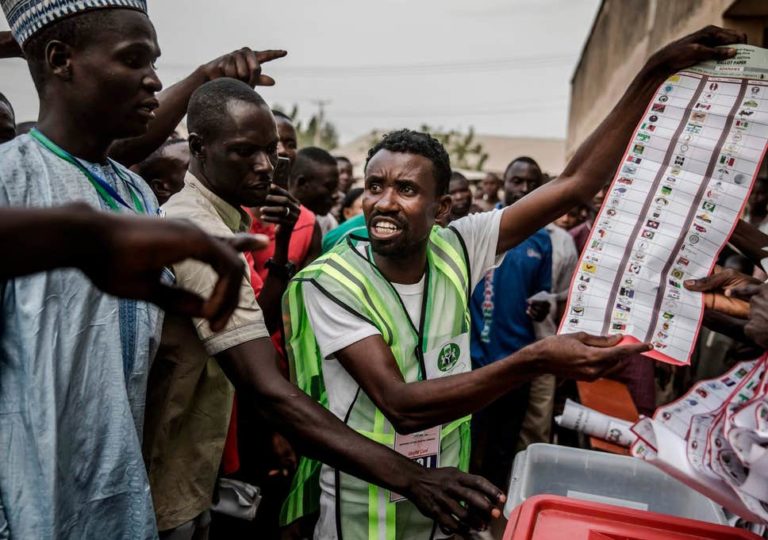 In Bayelsa alone, seven deaths were recorded in 90 electoral violence cases reported by Kimpact Development Initiative (KDI), an NGO, while the gruesome murder of Salome Abuh, PDP women leader in Kogi, was a needless bloodletting two days after the poll.

The Situation Room, a Coalition of over 70 Civil Society Organisations (CSOs) that monitored the Nov. 16 Bayelsa and Kogi elections, said the level of violence was unacceptable.

“The levels of violence witnessed in the two state elections are unprecedented, alarming and raise questions about the credibility of the elections.

“Nigerians had expected that lessons learnt from the 2019 general elections by stakeholders, especially political parties, the police and other security agencies, would have been taken to improve upon the conduct of the Bayelsa and Kogi elections,” said the coalition convener, Clement Nwankwo.

The above report indicates that off season polls are even worse off in spite of heavy deployment of security personnel beyond what is usually available during general elections.

The story is the same of the general elections held across the country earlier in the year. The Situation Room said the worst incident was in Abonnema, Rivers State, where the army said seven people died in a shoot-out between an unidentified gang and Nigerian soldiers.

In all, about 626 people were killed during the 2019 election cycle, starting with campaigns in 2018, according to a report by SBM Intelligence, which monitors sociopolitical and economic developments in Nigeria.

In 2011, post-election violence, including killings, broke out in some northern states and even during the relatively peaceful 2015 general elections, 66 incidents were documented by the Independent National Electoral Commission (INEC) across the country.

INEC had to cancel elections in places where the elections were disrupted, and held supplementary elections later.

The history of electoral violence dates back to when Nigeria attained independence and since then, elections in Nigeria have been characterized by violence, which ultimately prepared the grounds for the first military coup of 1966.

Various analysts have identified causes and perpetrators of election violence and squarely blame it on desperate politicians bent on winning elections at all costs against the wishes of the people.

Besides the winner-takes-all and attractive perks of public office which made the jostle for political office a do-or-die affair in Nigeria, some analysts also fingered the lack of transparency by the electoral umpire and surmised that unless perpetrators are summarily brought to book, election violence will continue to be a recurring feature of our political space with all its attendant unpleasant consequences.

Stakeholders say that electoral violence scares away some good, honest and capable hands from participating in the electoral process leading to political apathy amongst the populace.

Similarly, Peter Esele, a chieftain of the All Progressives Congress (APC) in Edo, in the same vein, said that the solution to electoral violence would be to bring those involved to book to serve as deterrent to others.

“Electoral violence has led to political apathy amongst the populace. Democracy is all about participation.

“The electorates are scarred to come out to carry out their civic responsibility to vote during elections for fear of molestation or even being killed.

“You can imagine a population of almost 200 million, only about 60 million are registered to vote and of that figure, less than 30 million actually come out to cast their votes. This is not good for democracy,” Esele said.

Mr Bisi Oyinloye, a PDP stalwart in Kwara, said although there are few respected politicians who don’t condone thuggery, many politicians are guilty of this act of violence.

A political analyst also in Kwara, Mr Bamidele Abdulrauf, says many politicians in Nigeria involve thugs in their political campaigns and go as far as arming thugs to rig election by giving them ammunition, drugs and money to fight the opponent parties.

He said that one of the ways to curb election violence was to make political positions less attractive.

He also lauded the recent border closure to reduce illegal importation of ammunition.

A renowned politician in Kano, Alhaji Ahmed Inuwa, said with the high rate of unemployment, especially among youths, election violence will continue to pose a threat to Nigeria’s democratic process.

“Idleness and redundancy among youths is the main reason why politicians use these youths as political thugs during elections to cause trouble; those who have something doing will never engage in electoral violence,” he said.

Adewale Yagboyaju, Professor of Political Science at the University of Ibadan, says that election-induced violence is almost becoming a norm in Nigeria.

“Candidates of political parties and their supporters are involved because of the mindset of winning at all costs – win or smash the system.

“The security agencies, especially escorts of the political class and others on election duties, are involved either by way of intimidating the opponent’s camp or looking the other way when crimes are committed by the camps to which they are committed are also involved.

“It’s natural that offenders and violators will continue once they are almost sure that even if they are caught, they are unlikely to be punished,” Yagboyaju said.

According to him, election-induced violence has huge socio-economic and political consequences.

“Besides high level apathy as voters are discouraged by the probability of violence, there is a lot of capital flight shortly before and after elections in Nigeria because investors do not want to be caught napping.

“Ultimately, the electoral space is gradually being left for only those who can damn the consequences,” Yagboyaju said.

According to Aderemi, there is a mechanistic connection between electoral violence and voter apathy as potential voters are scared off by threats of violence.

Leader of Enugu State House of Assembly, Chief Ikechukwu Ezeugwu, says that desperation by political actors is a major cause of political violence in elections and called for reforms to allow Nigerians to start voting electronically.

“Both voting and collation of results should be electronically done so that efforts of those desperate politicians that cause violence in the field will be exercise in futility,’’ he said.

“We should involve real time electronic transmission of results and collation of results in elections to lessen human interference in the electoral process,’’ Chukwudum said.

Mr Larry Oguego, Executive Director of Human Rights Volunteer Corps (HRVC), noted that “violence will not end until we start holding politicians accountable for the sins of their supporters.

“We must start prosecuting people who perpetrate electoral violence as well as holding politicians accountable for the violence committed by their supporters.

“Just as football clubs are penalized and fined due to the activities or violence done by their supporters in the stadium,’’ he said.

A politician in Imo, Mr Charles Ubah, is even calling for a harsher punishment for political godfathers harboring criminals.

Ubah wants total disqualification of any party seen or alleged to be inciting or involved in political violence as a way of curbing the trend.

Ubah also called for a lifetime ban to be placed on politicians who sponsor thuggery and other forms of electoral violence while removing the option of appealing such punitive measures in court.

In his view, the possible loss of the right to contest for political office might be enough to deter electoral violence in the country.

Dr Raphael Aganga, a lecturer in the Department of Political Science, Federal University, Otuoke, Bayelsa, said perpetrators of electoral violence should be properly prosecuted so as to tackle the menace in the country.

“Offenders must be properly prosecuted; in this country, people commit electoral offenses recklessly, with impunity, because they believe they could do it and get away with it,” Aganga said.

According to him, a politician who knows that he will oversee trillions and billions of naira when he comes into office will go to any length, even snatching ballot boxes, to win elections.

Miss Onyinyechi Nwosu, President of Vivacious Development Initiative, says electoral violence is caused by an unhealthy desire to capture and hold on to power.

“The greed mentality and insensitivity where the winner and his supporters take it all is the main reason for electoral violence.

“In a democracy, people choose their leaders, but in Nigeria, leaders impose themselves on the people, through violent means.

“The electoral regime has not promoted justice, equity and fairness and where you have electoral impunity, it also promotes act of violence.

“Until the people caught in the act are adequately punished to serve as deterrent, political violence will continue to flourish,” Aluko warned.

“Politicians engage, pay and arm thugs to create violence during elections so that the ground will be fertile for them to rig.

“Any politician causing violence at elections should be instantly disqualified. If that is not done, we have not started and we are finished in Nigeria,” Tsav said.

“A very stringent punishment must be recommended for electoral violence offenders, irrespective of their status.

“This trend has continued because nobody had in the past been severely punished, especially the elites that sponsor violence, ‘’ he said.

According to Oba Laaro, Mass Communication teacher at University of Ilorin, our legal system is so slow.

“There are people, who were arraigned for perpetuating violence in 2015 elections, but are yet to be convicted or discharged till now,” he said.

An APC chieftain in Cross River, Mr Cletus Obun, says Nigerian electorate should be made to vote with their Automated Teller Machines (ATM) card to enable them make their choices without intimidation or coercion.

Prof. Isaac Albert, Dean of Multidisciplinary Studies University of Ibadan, says without the political will and courage to jail perpetrators of electoral violence, it might continue unabated.

On his part, Prof. Philip Ujomu of the Department of Philosophy,  Federal University Wukari, Taraba, says a situation where civilians have access to police uniform, guns and vehicles on election day is unfortunate.

“There is the need to overhaul the security architecture in order to restrict the police presence at the polling booths,” Ujomu said.

He noted that recent polls conducted in the country had shown the inglorious role played by the nation’s security forces in perpetuating electoral violence.

“The military, the police force largely have a lot to answer, as far as the recently conducted polls are concerned.

“We need to place legislators on a part-time salary and ensure that the language of violence on the campaign trail is stopped,” he said.

In underscoring his zero tolerance for electoral violence, President Muhammadu Buhari has warned that nobody will use his resources or office to rig the 2023 elections and vowed that he will use law enforcement agencies to ensure that the elections are free, fair and credible.

“I will make sure, using the law enforcement agencies, that elections are free and fair, nobody uses his office or his resources to force himself on his constituency,” President Buhari said during his recent birthday.

Beginning with the off season governorship polls in Edo and Ondo states in 2020, Nigerians look forward to necessary reforms to cleanse the nation’s political space of thuggery and put the perpetrators and their sponsors where they belong, say analysts. (NANFeatures)