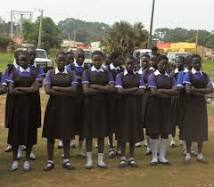 Godiya Usman an 18 years old girl revealed her ordeal in the hand of  Boko-Haram gunmen who invaded her school. She was the first girl that escaped.

” At around 11:30 in the night most of the girls had not slept, I was reading in my bed when we started hearing noise of gun shots. Not quite long, we saw some men dressed in military uniform enter our hostel, so we happily did what they said, because normally anytime there is an attack in town, the soldiers use to come into our school to protect us.

But by the time we got out, they ask us to show us where the school kitchen was, so we shown them then immediately they went there and took out bags of food stuff and then set the kitchen on fire, they also set our hostel on fire. Then it was occurred to us that they were Boko Haram.

They rounded us up at the gate and told us to enter a bus,when the 3 buses could not take us all,they send some of their colleagues to town to go and get vehicles,those ones returned with a truck,which some of the girls enter,we drove out of the town and into the bush.

They stopped at every village attack people and burn their houses. we planned in our truck that if we stop in any village a and attack the village when they are not looking we should all jumped down and run away. So when they stopped at the next village, the ones guiding us also usual jump down and went into the village shooting, we checked our side and they weren’t looking at us. The others girls on the other side of truck check their own side and said it was clear, so I jumped down then I looked at the other girls they did not jump.

So I stood up and started running when I had ran for about 50 meters, it sounds as if some of the girls had also jump down, but I could not see because it was dark so I just kept running ran in the bush when I got tired I sat down and slept off. I was found by some vigilantes who took me home”.