By Sadiq Umar – The House of Representatives has suspended its former Chairman Committee on Appropriation, Abdulmumin Jibrin for 180 days over what it called ‘un-parliamentarian’ conduct.

Jibrin’s sanction followed the adoption of the reports of the House Committee on Ethics and Privileges which recommended punitive measure against the former Appropriation Committee Chairman. 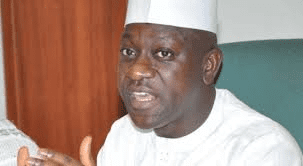 The Kano born Rep. had blew the whistle accusing the Speaker, Yakubu Dogara; his Deputy Yusuf Lasun; Minority Leader, Leo Ogor and House Deputy Chief Whip Dokwa of padding the 2016 budget to the tune of N40billion after his removal as the Chairman Appropriation Committee.

However, at the resumed plenary last week Tuesday, September 20, the House adopted a motion referring the matter to its Ethic Committee.

The motion moved by Emmanuel Orker-Jev, (APC Benue) proposed tough sanctions against Jibrin for what was described as “unparliamentary conduct.”

However, Jibrin failed to honour the invitation of the Ethics and Privileges on Monday, claiming that the matter he was being summoned for, was before a court of law.

Committee Chairman, Nicholas Ossai (PDP Delta) said Jibrin’s failure to appear before his “properly and constitutionally constituted committee” was, in effect, a defence.

At the Wednesday plenary, Jibrin was suspended for 180 legislative days, as well as from holding House positions of authority all through the tenure of the eight National Assembly (NASS).

He was banned from the premises of the National Assembly in the course of the disciplinary action. He would also not receive salaries or allowances.

He was also required to write an apology letter to the House upon the completion of the suspension period.