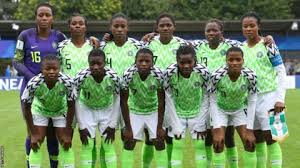 The Permanent Secretary, Ministry of Youth and Sports Development, Olusade Adesola has said that hosting the FIFA Women’s U-20 World Cup in 2020 will further boost Nigeria’s image and economy.

Mr. Adesola said this on Thursday in Abuja when a five-man FIFA inspection team for the tournament paid him a courtesy visit in his office.

The permanent secretary, who described football as a unifying factor, expressed government’s readiness to host the competition.

According to him, if Nigeria is granted the hosting right, it will help in boosting the image of the country and its socio-economic development.

Earlier in his remarks, the Nigeria Football Federation (NFF) President, Amaju Pinnik, said Nigeria would be the first developing country to host the tournament, if the bid was granted.

He stressed that Nigeria had attended all the editions of the competition and was the most qualified out of the four countries bidding to host the event.

The FIFA delegation Leader, Kaj Heyral, said that they were impressed with some of the facilities on ground in the country.

He said that the age-grade competition was one of the avenues for discovering young female talents and developing the game across the globe.

The team had earlier visited four cities proposed for the hosting of the tournament, that is, Lagos, Benin, Uyo and Asaba.

Nigeria is the only one out of the four competing countries that had participated in every edition of the FIFA U-20 Women’s Cup since the competition was launched in 2002 in Canada as an U-19 Championship.

It was upgraded to U-20 competition in 2008, while USA, Germany and Brazil are the other three ever–present teams.

The Falconets reached the final of the competition in 2010 and 2014, losing to Germany on both occasions, and were semi finalists in Japan in 2012.