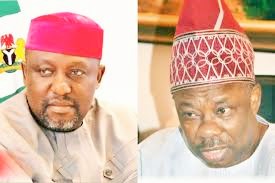 By Sadiq Umar – The National Working Committee (NWC) of the All Progressives Congress (APC) has suspended Ogun State, Ibikunle Amosu and his Imo counterpart, Rochas Okorocha, from the party.

The NWC also announced the suspension of the Minister of Nigeria Delta Affairs, Usain Usain and the Director General of the Voice of Nigeria (VON), Osita Okechukwu.

The NWC recommended that the highest organ of the party, the National Executive Committee (NEC) should expelled the men from the party.

A statement by its National Publicity Secretary, Lanre Issa-Onilu, Friday afternoon in Abuja said they were suspended for engaging in “anti-party activities.”

Mr. Amosun and Mr. Okorocha were both elected senators on the platform of APC during last Saturday elections but they are supporting governorship candidates other than those of APC for the March 9 governorship election.

Full Statement of APC below:

The National Working Committee (NWC) of the All Progressives Congress (APC) has suspended the Governor of Ogun State, Ibikunle Amosun and the Imo State Governor, Owelle Rochas Okorocha for anti-party activities.

Also suspended by the APC NWC over anti-party activities are the Minister of Niger Delta Affairs, Pastor Usani Uguru Usani and the Director-General of the Voice of Nigeria (VON), Mr. Osita Okechukwu.

This decision was reached on Friday at a meeting of the Party’s NWC, presided by the National Chairman, Comrade Adams Oshiomhole at the APC National Secretariat.

The NWC has also taken a decision to recommend the expulsion of the suspended individuals to the National Executive Committee (NEC) of the party.

The NWC would also issue a query to the Governor of Ondo State, Rotimi Akeredolu over his glaring anti-party activities, which greatly affected the fortunes of our candidates in the recently-conducted Presidential and National Assembly elections in the state.

Recall that the NWC had earlier written to the suspended governors on their anti-party activities, and several other steps were taken to ensure they desist from taking actions that are inimical to the interests of our party and candidates. Notably, these individuals have not shown any remorse and have actually stepped up their actions.

The party reviewed the serial anti-party activities of the concerned individuals before and during the last Presidential and National Assembly elections in their respective states and resolved to enforce party discipline in line with our constitution.

The NWC noted how the suspended members have continued to campaign openly for other parties and candidates that are unknown to our great party, even while they have constituted themselves as opposition to APC candidates in their respective states.

Importantly, the NWC is closely monitoring the activities of our members across the country, and particularly, in the states these suspended members belong to. We wish to reiterate that any member of our party who takes any action solely or in line with the directives of the suspended members to undermine our party’s candidates in the coming governorship and House of Assembly elections would face disciplinary actions.

We wish to congratulate our members nationwide for the victories we recorded across the country in the last elections and particularly, the renewal of our party’s mandate for President Muhammadu to continue to pilot the affairs of this country for another four years. This could not have happened if not for the hardwork and commitment of our members. We therefore urge all our members to unite and work ever harder to ensure victory for our candidates across the states in the coming governorship and House of Assembly elections.

Consequently, the NWC calls on our members to disregard directives and actions of the suspended individuals as APC would continue to live by the dictate of our constitution.