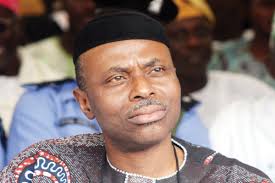 We welcome you to the historic city of Lagos, a city that has produced icons in different fields of human endeavour – first generation medical doctors, lawyers, politicians, engineers and entrepreneurs. 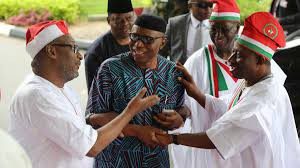 This is a city that truly prides itself as one of Africa’s foremost educationally advanced centres, a veritable city of culture and learning. Mr President, leaders of our great party, distinguished
Nigerians, I stand on firm ground to state categorically that hardly is there any home in Lagos and indeed the Southwest that cannot boast of tenth generation school certificate holders. This is why, among others, we will not settle for a President with less than a University degree.

Let me welcome again, Mr President, Goodluck Ebele Jonathan, Ph.D – a democrat in words and in deed, a believer in the rule of law, a leader who is genuinely humble, kind, accommodating, forthright, competent, transparent and tolerant. A leader who in spite of challenges has remained cool, calm and level-headed.

We thank you Mr President that, in spite of being the most abused and negatively-profiled President in the history of this country, you have refused to roll out any obnoxious law of the semblance of Decree 2 of 1984.

To you Mr President, discipline is about compliance with high democratic ethos rather than the promulgation of retroactive laws to intimidate the citizenry through state murder.

You definitely are a true democrat (not a born-again democrat). You are a true lover of Nigeria – from the wetlands of the Delta, through the thick rainforest of the Southwest and East to the Savannah of the North, you have touched the lives of Nigerians, both high and low. You have allowed the private sector to thrive, yet you have not abandoned the under-privileged of the society. While the private sector is encouraged to invest massively in Agriculture, Power, Aviation and other strategic sectors of the economy, you are also building Almajiri schools and unprecedentedly expanding access to tertiary education.

You are proactively investing in Micro, Small and Medium Enterprises (MSMEs) and providing productive engagement for our young ones in Agriculture, ICT and the creative industry.

Mr President, you are indeed a progressive.

On behalf of the people of Southwest, we welcome you and your entourage to Southwest Nigeria. You have started the Lagos-Ibadan expressway, you have also embarked on the rehabilitation of the rail system, you are giving a face-lift to our airports including Ibadan airport. For these and many more, the people of the Southwest are grateful. Afterall, we can remember the anti-human decision to
terminate the Lagos metroline project by some other government.

That project into which the Jakande-led administration had committed a whopping sum of N70 million (about $75 million at that time) was meant to put an end to the traffic nightmare in Lagos metropolis through the installation of a circuit of rail lines that would have stretched from Agege to Marina Ikorodu in the north and Badagry in the east, ferrying nearly a million people a day, 31-years ago. While some chose to destroy, you have chosen to build.

Today, Mr President, Benin-Ore-Shagamu expressway is witnessing massive rehabilitation, the Lagos-Kano rail lines, moribund for over 15years have been re-activated, Agriculture has regained its pride of place and you have strengthened our democratic institutions through free, fair and credible elections.

I am convinced that the hands of Goodluck Jonathan that started these good works will surel complete them.