By Tom Garba,Yola – Governor Mohammau Jibrilla Bindow of Adamawa says money belonging to State are meant for development and not for stealing or sharing to anybody. 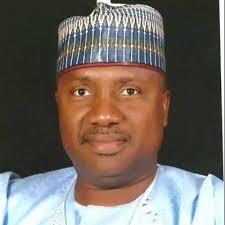 Mr. Bindow said this on Friday while receiving traditional rulers as part of Sallah homage at the government House Yola.

He said that he would not share money to people, adding that he must fulfill all his campaign promises.

“For this, l am hell-bent on achieving my campaign promises by turning the face of Adamawa.

“I have not come to steal people’s money and if I do that I will disgrace my family, as you all know that I am from a well to do background, Mr. Bindow told his audience.

Adding, “What I require from you is prayers and support for us to take the state to the higher heights.”

Mr. Bindow use the Sallah homage to remind the traditional rulers to help him call the attention of the people living along the river banks and those living around floods prone areas to vacate those areas for safer grounds.

He said the effect of flood disaster was irremediable, noting that the government could not adequately compensate the victims to their satisfactions.

The governor however, said that he had already sought the assistance from the Federal Government for the disaster.

He said that his administration would explore avenues that could permanently address the menace.

“I need a permanent solution to address the problem of flood in our state. We are already exploring avenues together with the Federal Government on the issue,” he said.

“Although, before our lasting solution, l advise residents to avoid inhabiting on flood prone areas because water must trace its way and such could affect human settlements.”

The governor also said that the season has affected road construction projects.

He gave an assurance that those projects would be completed before the next rainy season.

He urged the people to be patient and pray for his administration.

Earlier, Dr Barkindo Musdafa, Lamido of Adamawa called on the people to support the governor to achieve his vision of developing the state.

Mr. Lamido who is the chairman of the state Council of Chiefs advised people not to distract the government

According to him, within your 100 days in office, the state has witnessed tremendous change.

“I am convinced that by the time you administer this state for eight years, we will become one of the most economic viable states in the world.

“I urge the people to be patient and pray for this government. My conviction is that God has put him as the governor today and whoever that opposes him as well opposes God,” he said.

First class chiefs who paid the Eid-El-Kabir include; the Emir of Mubi, Hama Batta, Murum Mbula and Gangwari Ganye.