The Nigerian Golden Eaglets has made it into the final of the FIFA under- 17 World Cup tournament going on in the United Arab Emirate UAE following a 3-0 win against Sweden.

Taiwo Awoniyi scored his third goal in two games to secure a final place for the ravaging Eaglets who will now meet Mexico in another Group F rematch.

The game began at a high pace with both sides carving out half-chances in the first 60 seconds. After the initial frenzy of attacks, the pattern of play changed giving way for the Nigerian side to pressed forward in waves, trying to pin Sweden back and cut off the supply lines to foraging striker Valmir Berisha.

The chance came for Awoniyi to score his team’s first goal against goalkeeper Sixten Mohlin of Sweden at the semi final match which led to the fall of Sweden at Al Rashid Stadium in Dubai, UAE.The same combination of Awoniyi and Kelechi Iheanacho that sank Uruguay at the quarter-final played out well in the final as Iheanacho kick the ball up through midfield and chipped in a looping pass for Awoniyi, who hardly had to break stride before pummeling past Mohlin for his third goal in two games.

Barely seconds into the second half, Chidera Ezeh headed against the upright. It was a warning from the free-attacking Nigerians, who kept pressing for a second goal.

Coach Roland Larsson threw on big striker Carlos Strandberg for the last half-hour, desperately trying to find a way to breach the Nigerian rearguard. But the Eaglets kept pushing. Musa Yahaya tried an effort from the corner of the box in the 66th minute that skimmed the outside of the post. Awoniyi had the ball in the net a few seconds after, only to be denied by an offside call, much to the chagrin of the partying fans in green.

Sweden would not go quietly, and Strandberg nearly volleyed home with a quarter-hour to go, only to be denied by Alampasu. The resulting corner kick was headed hard at goal by Linus Wahlqvit, but his try was saved again by the Nigerian keeper, who had his gloves on the right way around at the Rashid Stadium.

In the end, the Nigerians were in no mood to be charitable. They got their insurance goals inside the last ten minutes. Samuel Okon cut in from the left and hammered his shot low and inside the post to end Sweden’s dream. It was all over even before Chidera Ezeh added a third seconds later to make it 3-0 and send Nigeria to the final, where they will be pressing hard for their fourth title. 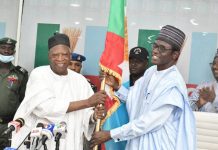