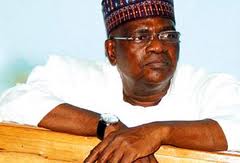 A member of the House of Representatives and Peoples Democratic Party’s senatorial candidate for Gombe Central, Hon Ismaila Kumo, has urged Nigerians to disregard claims by former governor, Sen. Danjuma Goje that he won the senatorial election in the state.

Goje had rushed to a national television to declare himself winner of the elections when the collation of results is yet to be concluded.

Prior to his self-declared victory, Goje had raised alarmed that he was placed under house arrest by security personnel.

Speaking in a telephone interview with our correspondent in Abuja, Hon. Kumo dismissed as false, claims by Goje that he won.

He wondered how a former governor out of sheer desperation would declared himself winner in an election that is still ongoing.

“”No, no, no, the results are still being expected from some villages and polling centres, he could not have announced himsel. How can he declare himself winner in an election that INEC is still collating the result?” a surprised Kumo asked.

Earlier, a Peoples Democratic Party PDP official in Pindiga town, Habeeb Danjuma, had called our correspondent to confirm if indeed Goje had declared himself winner on national television. He expressed shock saying, the results so far received in fact show that Hon. Kumo was still ahead in the race.

“But, l don’t want to say that now since it is INEC’s responsibility to declare result not mine,” Pindiga said.

He also explained that the claim of house arrest by the former governor was false. “What he did was that he called one of the journalists that is covering the Senate and framed the arrest story.

“It was meant to draw media attention which he achieved but again, he lied to Channels. l think the media should be careful with this man,” Pindiga added.