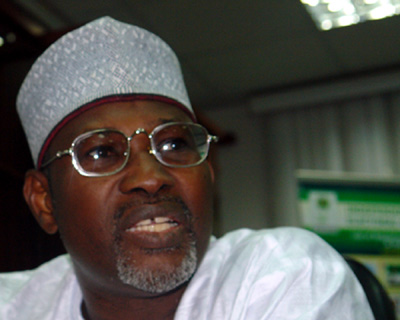 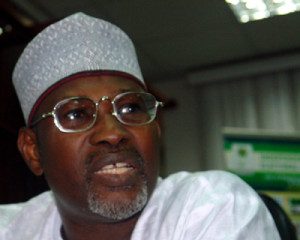 By Nuel Suji, Abuja.
The Chairman of the Independent National Electoral Commission (INEC), Prof. Attairu Jega, on Wednesday told legislature that any further postponement of the elections is unconstitutional, even as INEC chairman revealed that over 4 million people did multiple registrations in the country.

Jega added that the Commission will engage not less than 100,000 adhoc staff for the forthcoming general elections scheduled to hold on March 28.

The INEC boss who was at the Senate to brief lawmakers on the preparation for the poll, in a meeting that lasted for about 5 hours, said the commission will go ahead to use the card reader machines for the accreditation of voters only.

The INEC chairman insisted the Commission was ready for February 14 elections but for the advice by the National Security Adviser(NSA) Sambo Dasuki and Military Service Chiefs, forcing the commission to postpone the elections in the country.

“We believe that we could go ahead with the scheduled election  for Feb. 14 and 28, except for the new development in  which INEC received a letter from NSA conveying a strong advise from the service chiefs for a rescheduling of elections for six weeks,” Jega told the senators.

Adding: “The NCS reviewed the situation after my presentation  and concluded that INEC should go and make further consultations and in compliance with its statutory powers decide on what to do.

“On feb 8, after additional broad consultation with key stakeholders the commission decided to acede to the strong advise of the NSA and the service chiefs to  reschedule the election to March 28 and April 11.

“On Feb 15 the commission met again, reviewed the new development and took a decision on how best to utilize the six weeks extension to add value to our operational and logistical preparation for the election.”

The INEC boss also revealed that over 4 million people did multiple registrations in the country  adding that the commission will engage not less than 100,000 adhoc staff for the forthcoming general elections scheduled to hold on March 28.

He the Commission  introduced this innovation to prevent electoral fraud informing the lawmakers that the time duration for accreditation of electorates will not be more than  on  10-30 seconds.

“With regards to the card readers, the use of the PVCs and  the card reader for the conduct of the 2015 election we believe are in accord with the provisions of the Electoral Act 2010 as amended. They were introduced also, pursuant to the powers granted to the commission by the 1999 Constitution (as amended), INEC is empowered by Section 16(4) of the Electoral Act 2010 to and I quote: wherever it considers it necessary, replace or any voter card for the time being by voters.

“The decision of the commission to replace TVC with PVC is in accordance with the provisions of the electoral Act as amended. An election is said to be validly conducted if it meets certain basic requirements including accreditation of voters. An election cannot be said to be properly conducted, if the steps provided by section 49 of the Electoral Act 2010 are not complied with.

“This section requires that anybody intending to vote shall present himself with his voter card to a  presiding officer who shall certify him or her, that person is on the register of voters before issuing such a person with ballot paper.

Explaining further he said, “The use of the card reader for the purpose of accreditation of voters is one of the innovations introduced by the commission to improve the credibility of the electoral process, in particular, the accreditation process. It is not offensive to the electoral Act or to the constitution. It adds value to the desires of Nigerians to have a credible election in line with international best practice.

“Whereas section 52 of the electoral Act of the Electoral Act prohibits the use of electronic voting, the card reader is not a voting machine and it is not used for voting, it is merely an  electronic devise introduced to improve the integrity of the voting process. It should be remembered that section 78 and section 118 of the constitution grants INEC powers to register voters and to conduct election in Nigeria.”

Reacting to Jega presentation, Senator Ali Mohammed Ndume applauded INEC for their preparation towards the conduct of free and fair elections in the country but expressed doubt at the readiness of security agencies to ensure secured election.

On why there is high increase of people collected their voters Permanent Voters Card(PVC) in the troubled states in the North east, Senator Ndume explained this is possible because People that are internally displaced in those states are in the same location there by making it easy for INEC to distribute the PVC to the people.