By Sadiq Umar – Fresh controversy has dug the approval granted the federal government to withdraw $1billion from the Excess Crude Account (ECA) to combat security challenges in the north-east, as Chairman of South-South Governor’s Forum, Seriake Dickson demanded the exclusion of 13 per cent derivation component accruable to oil producing states from the money.

Mr. Dickson who is the Governor of Bayelsa State, asked the federal government to exclude the 13 per cent derivation funds from the $1 billion so as not to subject the oil producing states to double contributions to the national security funds. 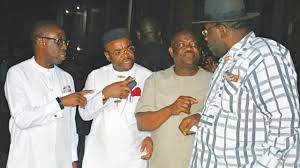 The South-South governor’s position is contained in a statement signed by the Commissioner for Information and Orientation, Daniel Iworiso-Markson, on Wednesday.

The statement noted that the oil producing states would be contributing not only their statutory allocations like other states, but also their 13 per cent derivation fund constitutionally designed to address special circumstances including security, occasioned by the hazards of oil production.

Although, Mr. Dickson did not clarify whether the Oil Producing States jointly agree on this, the he, however, stated that he had discussed the issue with both the Vice President who is Chairman of the National Economic Council and the Chairman of the Nigerian Governors’ Forum.

“Our position generally has been that leaders should collaborate on issues of national security and the economy. On these matters, there should be no partisanship or showmanship because these issues touch on the core of our nation and the individual wellbeing of everybody.

“Secondly, as it has been done before, Bayelsa has no opposition to the withdrawal of money for national security expenditure targeted at improving the capacity of our military and security agencies to protect the territorial integrity of the country and all Nigerians.

“Our position is that the 13 per cent derivation element be deducted and sent to the states. Not doing so means that the oil producing states would be contributing from both ends: we will be contributing our statutory allocations like every other state, and then the 13 per cent derivation which is meant to address special circumstances as oil producing states, including security challenges.

The Bayelsa Governor further demanded that a committee of the Nigeria Governors’ Forum be set up to interface with the Chairman of the National Economic Council and leadership of the national security agencies to receive briefings on the details of items to be procured.

According to him, it is necessary for the committee to be briefed on the modalities of procurement to allay concerns already expressed by a cross segment of the populace.

Mr. Dickson said that Bayelsa like other states, would be interested in knowing what component of these security procurements would directly benefit the security architecture in Bayelsa.

“That a committee of the Governors’ Forum be set up forthwith to liaise with the Vice President as Chairman of the National Economic Council, and heads of the national security agencies to receive briefings on details of the proposed procurements in order to allay the concerns being expressed segments of our population. We would like to know specifically what aspects of these investments are coming to Bayelsa,’’ he added.

It would be recalled that the National Economic Council (NEC), last week authorized the federal government to withdraw $1billion from the Excess Crude Account to combat security problems in the northeast.

However, Governor of Ekiti State, Ayodele Fayose, had faulted the decision saying it was foisted on NEC by the federal government. Mr. Fayose alleged that the money was actually meant to prosecute President Muhammadu Buhari’s second term election in 2019.

He has proceeded to the court to demand Ekiti’s statutory share of the $1billion.