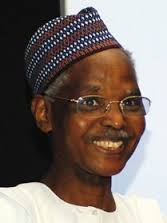 Born on August 26, 1938, Lukman was former Secretary General of the Organisation of Petroleum Exporting Countries, OPEC between January 1, 1995 and December 31, 2000.

He was made a Knight of the British Empire (KBE) in 1989 and Officer of the Legion d’Honneur of France in 1990. Lukman is founder of Afren PLC and served as its Non-Executive Chairman from November 2, 2006 to December 2008.

He served as Member of Supervisory Board at Dietsmann N.V. He was a Non-Executive Director of International Mining & Infrastructure Corporation plc since January 25, 2012. He was also a Director of Ivanplats Limited since February 14, 2012. He served as Director of Mpf Corp. Ltd., and Jaiz Bank PLC.

A Member of Advisory Board at Wilton Resources Inc., since November 28, 2012, late Lukman served as Director of AIICO Insurance Plc since December 4, 2003. He served as Non-Executive Director of Afren Plc., from February 16, 2005 to December 2008.

He was a Director of MPF Corp. Ltd. Dr. Lukman received B.Sc. (Hons) in Mining Engineering from the Royal School of Mines, Imperial College of Science and Technology, University of London in 1962, Postgraduate Certificate in Mining & Mineral Exploration from 1967 to 1968 from the University of Mining & Metallurgy, Leoben, Austria, postgraduate in Mineral Economics from 1977 to 1978 from McGill University, Montreal and PhD in Chemical Engineering in 1988 from University of Bologna, Italy.
He held Doctorate degree from University of Maiduguri in Nigeria. He held Doctor of Science Degree from Ahmadu Bello University, Zaria and Two Honorary Doctorate degrees from Moore House College, Atlanta, USA and University of Benin in 1992 and 2002 respectively.