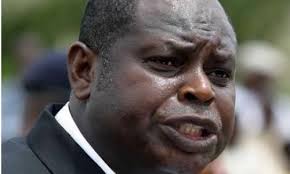 By Nuel Suji – A former governor of Bayelsa State, Diepreye Alamieyeseigha, is dead.

Mr. Alamieyeseigha died of cardiac arrest Saturday at the University of Port Harcourt Teaching Hospital, where he had been in coma for two days.

He was elected the first executive governor of Bayelsa in 1999 and was impeached 2005 on charges of corruption.

Only recently, Alams, as fondly called was been asked to be extradited to the United Kingdom by the British authority from where he escaped jail in 2005.

He was said to be diabetic and was treated recently away to Dubai for treatment.