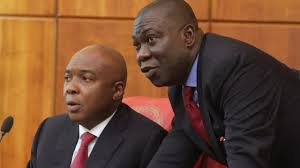 By Nuel Suji – An Order of the Federal High Court, Abuja, seeking to official notify the President of the Senate, Bukola Saraki and others of the commencement of trial in the alleged forgery case of the Senate Rules was Tuesday pasted on the notice board of the National Assembly. 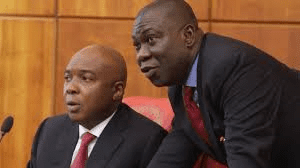 This came on the heels of Senate’s resolution summoning the Attorney General of the Federation, Abubakar Malami to explain with evidences justification for the arraignment of Saraki and Ike Ekweremadu, its two presiding officers.

The notice of the forgery case in Federal Government versus the Senate President, Bukola Saraki and three others, was served by substituted means following earlier failure to serve the accused.

The court postponed proceeding on the case today till June 27 to allow proper service of the notice.

Joined with Mr. Saraki as accused are his deputy, Ike Ekweremadu, former Clerk to the National Assembly, Salisu Maikasu, and his deputy, Benedict Efeturi.

In the suit, with reference number CV/219/16, the four are charged for conspiracy and forgery of Senate Standing Rules used for the elections of Messrs Saraki and Ekweremadu last June 9.

Court order on Saraki and Ekweremadu Justice Haliru Yusuf, Tuesday morning, had granted the leave to the Federal Government, represented by a Principal State Counsel, D.E Kaswe, to serve the accused by substituted means “to wit; by pasting it (originating summons) at the Notice Board of the National Assembly, Three Arms Zone, Abuja.”

However, the notice was torn from the board by a sergeant at arm official when journalists began to copy the content.

It was not clear whether the official acted alone or on the directive of the leadership of the senate.

At its session Tuesday, the Senate passed a resolution declaring that the Standing Rules was not forged but that it was the authentic.

In a motion moved by Senator Dino Melaye, who cited the Senate Rules, the Senate frown at what it called an attempt by the Executive Arm of Government to criminalize its leadership.

Dino accused the Buhari led Executive Arm of dictatorship, saying the Senate should be accorded the right to handle its internal affairs.

The Senate also summoned the Attorney General of the Federation, Abubakar Malami, to, within two days, “explain and justify with evidence” the basis for the charges pressed against its presiding officers, Messrs. Saraki and Ekweremadu.

The Senate accused the Buhari Administration of plotting to force leadership change in the National Assembly by “muzzling the legislature and criminalising legislative processes”.