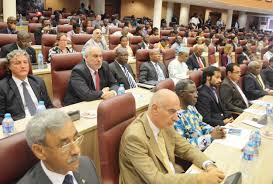 By Sadiq Umar – The Ministry of Foreign Affairs has advised foreign diplomats serving in Nigeria to desist from abusing diplomatic channels of communication, even as it frowned at travel advice that falsely portray the entire country as insecure.

The Ministry warned that a situation where some nations, in violations of diplomatic channels, talk directly with the government at the highest level without recourse to the foreign affairs ministry, violates the Vienna Conventions.

The Permanent Secretary, Amb. Olusola Enikanolaye, who spoke at his maiden meeting with the diplomats, Friday in Abuja, said a situation “where some embassies communicate directly with the Presidency and other arms of government rather than going through the ministry” saying it is no longer acceptable.

“In saying this, however, we must hasten to note that some diplomats and some missions are in the habit of going above the ministry of foreign affairs in seeking audiences and engagement with government at even higher levels.

“I need not to stress that this is not what we know as diplomat it is clearly violation of Vienna conventions. The ministry of foreign affairs is the main means of communication between the diplomatic communities and the host government,” he said.

He assured that the ministry would reorganize its operation to ensure effective and efficient service delivery.

“I am aware that we need to put our house in order in the ministry. And this is what we are already doing by ensuring that we respond quickly, proactively to your requests to your note verbal.”

“I thought you all know that note verbal is the highest form of correspondence between the diplomatic nations and the minister of foreign affairs.

“You cannot address note verbal to the presidency. It is not done. Please I am appealing to you to desist from such an orthodox means of communication with our government.

“As regard to seeking audiences, please make you request known to our principal at least a month ahead so as to give room for preparation and respect for authority. It is in our interest and yours that we have sufficient notice.”

Amb. Enikanolaye also condemned the issuance of “sensational travel advice” by some foreign diplomats in the country as if the whole Nigeria from north to east to southwest is not secure.