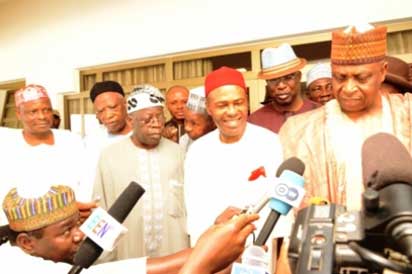 After weeks of indecision, the aggrieved governors and other members of Alhaji Kawu Baraje’s breakaway faction of the Peoples Democratic Party PDP have merged with the All progressive Congress (APC), even as two of the governors opted out of minutes after the announcement.

The Acting National Chairman of the PDP faction, Alhaji Abubakar Baraje announced the decision in Abuja.

The aggrieved governors had earlier reached the decision in a meeting held last night at the Kano State governors’ lodge in Abuja. The meeting ended at about 12.30am.

But in swift reactions to the news of their decampment, Niger Governor, Babangida Aliyu and his Jigawa counterpart, Sule Lamido backtracked saying they remained in PDP.

The governors of Jigawa and Sokoto states, Sule Lamido and Aliyu Wamakko were absent.

The crisis in the Peoples Democratic Party reached the climax when the seven aggrieved governors could not secure a meeting with President Goodluck Jonathan.

Hoewever, Governor of Niger State, Alhaji Babangida Aliyu has backed out of the merger with All Progressive Congress (APC) insisting he remains a member of PDP.

“We are shocked about the announcement of the merger even before conclusion of the meeting with the President. That is why Gov Babangida was not present at the meeting,” he said.