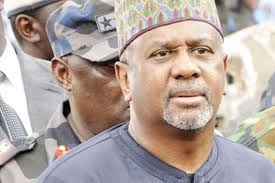 By Dipo Awojobi – The Federal Government failed to produce the National Security Adviser, NSA, Sambo Dasuki in court on Tuesday.

Dasuki was meant to stand trial before a Federal Capital Territory High Court in Abuja over allegations of corruption and misappropriation of money earmarked for the purchase of arms to fight Boko Haram levelled against him by the government.

His absence in court scuttled trial on Tuesday, though witnesses in the case were assembled by the Economic and Financial Crimes Commission, EFCC.

The Department of State Security Services, DSS, was yet to handover Dasuki to the EFCC for the trial.

At the resumed of the case, counsel to the EFCC, Oluwaleke Atolagbe, told Justice Baba Yusuf that he had made serious efforts through the EFCC to contact the DSS to produce the former NSA in court and regretted that as at the time the court was sitting his efforts did not yield fruitful result.

Atolagbe informed the court that there was no indication that Dasuki would be brought to court for the trial even though the witnesses are in court and that also Rotimi Jacob (SAN) who was supposed to be the lead prosecution counsel was at the Court of Appeal for a different matter.

He appealed that the matter be stood down pending the arrival of Jacob in Court to come and shed more light on the absence of Dasuki.

But counsel to Salisu Shuaib, a former Director of Finance ONSA, Chief Akin Olujimi said that the coming into court of Jacob would be inconsequential in the absence of the first defendant (Dasuki).

Olujimi, a former Attorney General of the Federation and Justice Minister, told the court that the prosecution had failed to produce the defendant in court and ought to admit that and asked for adjournment.

The SAN informed Justice Baba Yusuf that it is settled in law that trial cannot go ahead in the absence of the defendant and prayed the Judge to grant adjournment to the prosecution to enable them take steps to produce Dasuki in Court on the adjourned date.

Olujimi also asked the court to issue a stern warning to the prosecution to be serious in the trial and to ensure that Dasuki is produced in court at all stages of the trial as demanded by law.

In his own submission, counsel to Aminu Baba-Kusa, aformer Executive at NNPC, Mr Solomon Umor informed Justice Baba Yusuf that “ordinarily the prosecution ought to apply for a bench warrant against Dasuki for a failure to appear in court for trial but noted that in the instance case, the prosecution would not do so because they are the one responsible for the absence of Dasuki because of his unwarranted detention.

However, the Judge said because the conduct of the prosecution had been good in the past, he granted an adjournment of the trial till May 23, 2016.