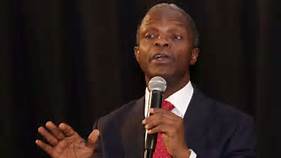 News Investigators/ Vice President Yemi Osinbajo says the present administration spent the sum of N8.9 trillion on infrastructural development in 2020.
Mr Osinbajo made the disclosure at the inauguration of the 21-storey Dakkada Tower, in Ibesikpo Asutan Local Government Area of Akwa Ibom, on Friday.
“We have invested more than any administration on infrastructural development.
“As at last year, we expended over N8.9 trillion on infrastructure development despite the severe economic meltdown in the country”, Osinbajo said.
Also last month, he said, the Federal Executive Council (FEC) approved the Lagos – Calabar rail project, which would pass through Uyo, as a major station.
“These infrastructural developments are set to establish Akwa Ibom State as a major industrial hub for not just Nigeria, but the West African sub region.
“At the end of last year, the Federal Executive Council also approved the full business case of the Ibom Deep Sea port, and of course, as a result of the active demands,” he said.
Mr Osinbajo noted that the 21-Storey Dakkada Tower was among the tallest buildings in West Africa, saying that the oil and gas companies should find it entirely auspicious to relocate their administrative headquarters to Uyo.
“This tower is state of the art, with the latest technology, developed for an efficient and smart world.
“I heard that some IOCs have expressed intentions. I am glad to know that the investment in the Dakkada tower was already yielding fruits,” Osinbajo said.
He said the completion of the Dakkada tower would address the paucity of accommodation for the IOCs in the state.
“My opinion on the 21-storey Dakkada tower is that, it complements the government’s effort at creating an enabling environment for investments to thrive in the state.
“It is a catalyst for the private sector, I commend the governor for his industrialisation agenda”, the Vice president said.
He noted that the industrialisation drive in Akwa Ibom was significantly one of the centrepieces of the Federal Government’s economic agenda.
Gov. Udom Emmanuel of Akwa Ibom described the Dakkada Tower as ‘the smartest, intelligent, most modern building’ Nigeria can boast of today, in Akwa Ibom.
He advised the International Oil Companies (IOCs) to relocate to Uyo and secure offices in the 21-Storey Dakkada Tower, as it was ready to accommodate them.
“The oil companies were complaining that they didn’t have office accommodation, that has ended today,” Mr Emmanuel said.
He said his administration was spearheading innovations that would create revenues and jobs, in order to put the state on the world map.
The governor commended the Vice President for consistently showing Akwa Ibom people love, saying that Prof. Osinbajo would come back to the state, to commission an International Worship Centre.
The State Commissioner for Special Duties, Okpolukpom Etteh said the Tower was the best ICT compliant building in the country, borne out of the directive of the FG for International Oil Companies to relocate their headquarters to their areas of operation.
Mr Ette said that the smart building was sited on a 48,000 sqm of land, with a 400 capacity car park and is defined by an increased automation and integration, advanced electronic and information technologies.
It also has an integrated structure, with a system, service, energy efficient and management, with an enhanced connectivity through wired and wireless networks and advanced sensor systems. (NAN)