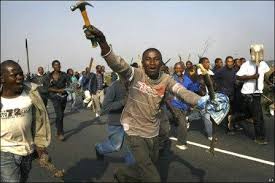 The federal government of Nigeria has condemned the Xenophobic attacks on foreign migrants in South Africa, warning that it would not tolerated, even as Minister of Foreign Affairs, Amb. Aminu Wali, assured that plans are in place to evacuate Nigerians if the situation gets worse.

A statement issued by the public communication division of the ministry of foreign affairs in Abuja said Nigerian would not tolerate any attack on its nationals in South Africa.

The statement urged President Jacob Zuma to put in place a policy that will prevent future occurrence of the attack, saying there is could be no justification for killing innocent people who are pursuing legitimate businesses.

Meanwhile, South African President Jacob Zuma has condemned the xenophobic attacks on foreigners, in which not less than six persons have died while shops have also been looted.

President Zuma described the attack as “shocking and unacceptable”.

No fewer than 5,000 people involved in a rally, held in the country’s coastal city of Durban Thursday, against the foreigners.

The attacks which was attributed to high rate of joblessness among South Africans who accused foreigners of taking their jobs was blamed on the Zulu king.

President Zuma told parliament Thursday that no amount of frustration or anger could justify the attacks on foreign nationals and the looting of their shops and called for calm to be restored to the areas most affected by violence.

Protesters led by the city Mayor and the Premier of KwaZulu Natal province, marched through Durban, chanting “Down with xenophobia” and “A United Africa”.