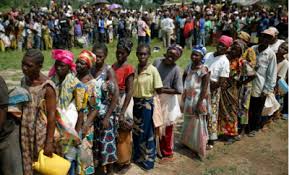 MAIDUGURI/News Investigators/ The Federal Ministry of Women Affairs in collaboration with the First Lady’s Office has commenced profiling of women and children in Internally Displaced Persons (IDPs) camps in Borno for support.

A leader of the delegation from Federal Ministry of Women Affairs, Femi Alaka, made this known on Wednesday at a meeting with officials of Borno State Emergency Management Agency (SEMA).

Mr. Alaka said the delegation would give attention to displaced persons in camps along border areas for the support to cushion their sufferings, adding that the issue of Gender-Based violence would also be looked into.

“We are going to work with SEMA, the state Ministry of Women Affairs to ensure success of the exercise,” Mr. Alaka said.

He noted that his team who could not visit some camps due to security challenges had already met with coordinators of the camps for the needed information.

In her remarks, the Chairperson of SEMA, Hajiya Yabawa Kolo, lauded intervention by the ministry and office of the first lady.

She assured the team of Borno Government commitment to support such intervention aimed at ameliorating the suffering of vulnerable people, particularly women and children.