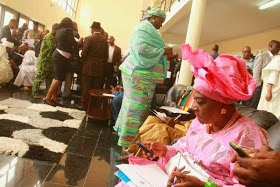 A female delegate, Mrs Ezenwa Ifeanyinwa, yesterday slumped at the National Conference on his way to auditorium after afternoon break.

Mrs. Ifeanyinwa, a delegate representing Market Women Association, was returning from lunch break which normally held between 2pm- 4pm and was heading towards the plenary chamber when she suddenly fainted.

She was immediately assisted by security agents, including operatives from the State Security Service, SSS, and the National Security and Civil Defence Corps, NSCDC.

The ailing delegate was rushed into one of the ante rooms outside the Conference plenary chamber and was later brought out to the lobby where a doctor was brought in to attend to her.

Before the arrival of the doctor, another female delegate had laid hands on her and prayed for her recovery.

However, as soon as the medical doctor arrived, SSS operatives, ordered a few journalists who witnessed the incident to leave.

Many of the delegates, who had already gone inside the chamber for the evening sitting, were not aware of Ifeanyinwa’s health condition.

Sources said she must have suffered exhaustion.

Meanwhile, elder statesmen and delegates  Ibrahim Mantu and Mamman Nasir, a retired Appeal Court President, yesterday warned the  delegates at the ongoing National Conference on the implications of using inflammatory speeches that could divide the conference and Nigeria in general.

Both Mantu and Nasir who  gave the warnings while making contributions to the inaugural speech by President Goodluck Jonathan at ongoing National Conference.

They reminded the delegates that the essence of the conference,  was to engage in healthy dialogue and disagreements that would lead to the resolution of all the nagging problems retarding the growth and development of the country.

Mantu who was a former Deputy Senate President, implored the delegates to be sensitive to  the feelings and aspirations of the Nigerian people who he said, desires tangible resolutions from the conference that would address the myriads of structural and constitutional problems hindering the country’s advancement. He urged the delegates to eschew inflammatory words while canvassing their arguements and ensure that their individual contributions was tailored towards nation building and national unity.

Mantu however lamented the loss Nigeria’s glory, saying that the nation has been buffeted by internal divisions arising from tribalism and ethnic discrimination. He also pointed out that religion has seriously divided the country.

In his own speech, the  retired Justice Mamman Nasir, urged delegates not to come to the conference with sinister intention of destroying the future of the nation. The challenged delegates to watch their utterances and strive to make national unity their watchword.

Nasir who pointed out that corruption has ” ruined ” the country, said the inability to tackle corruption by the leadership of the country was responsible for the spate of insecurity prevalent in the polity.

Nasir begged the  delegates not to disappoint the nation in the task before them, stating that the nation was greater than anyone.