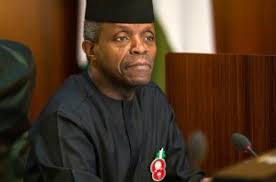 By Aisha Salisu
Abuja, March 18, 2020 (NEWS INVESTIGATORS) The Vice-President, Prof. Yemi Osinbajo, on Wednesday, stressed the need for holistic approach in proffering solutions to issues bordering on organised crime and insurgency.
Osinbajo, represented by the National Security Adviser, Maj.-Gen. Babagana Monguno (rtd), said this in Abuja, at an International Conference on Insurgency in the North-East Nigeria.
The News Agency of Nigeria (NAN) reports that the conference was organised by the Nigerian Defence Academy (NDA), in collaboration with the Nigeria Foundation for the Support of Victims of Terrorism-Victim Support Fund (VSF).
Osibanjo said that the theme of the conference, “Insurgency and Counter Insurgency in Nigeria: Critical Perspective on Boko Haram”, was apt in finding solutions to insurgency in the country.
“Insurgency in the North-East has lasted a decade and this reminds us of the need to reflect deeply on the remote and immediate causes of the conflict that has devastated the region.
“This has also spread to neighbouring countries and created one of the world’s worst humanitarian crises.
“While we continue to invest in building capacities of our armed forces and intelligence services, we recognise insurgency is an adaptive and complex threat, which cannot be addressed solely by kinetic measures.
“This calls for synergy of combat laws with those of humanitarian operations, conduct of military security and law enforcement institutions as well as sensitivity to the peculiarities of local environments.
“The strength of our military must be blended with the resilience of local communities, especially in an era whereby warfare is increasingly wedged by non-state actors,” he said.
Osibanjo said that the Federal Government had taken steps to promote awareness on the importance of human safety as core principle of the nation’s security management.
He said that the approach was designed to achieve sustainable security and welfare of Nigerians as the primary responsibility of government.
In separate interviews, the Chairman, VSF, Lt.-Gen. Theophilus Danjuma (rtd), said that measures had been put in place to engage researchers in studies on counter-insurgency as a way forward.
Danjuma, represented by the Vice Chairman of VSF, Alhaji Tijani Tumsa, said that the event marked the ninth year since the onset of insurgency.
According to him, tremendous successes have been recorded in the fights against insurgency and terrorism within this period.
Danjuma said, “This involved recapturing of areas that hitherto were under the control of Boko Haram; restoration of lives in communities affected by insurgency and the resilience of citizens against insurgents.
“As we enter recovery stage in fights against insurgency and are helping victims to return to normalcy, we must ensure that measures are taken to prevent reoccurrence of this evil,” he said.
In the same vein, a former Chief of Army Staff, Gen. Martin Luther Agwai (rtd), urged the military and civilians to work closely with each other to overcome insecurity in the country.
Agwai, in his keynote address said, “The military and civilians must work hand-in-hand to overcome security challenges.
“Boko Haram has brought lots of challenges hindering peaceful coexistence and alliances with different groups towards achieving what they want,” he said.
The former army chief, however, appealed to government at all levels and security operatives to partner the media in terms of information management in a bid to tackle insurgency. (NAN)